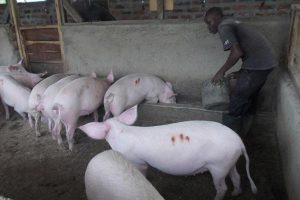 Ivory Coast’s ministry of Livestock and Fishery Resources has embarked on a project to boost pig production through a genetic improvement initiative following a huge loss which devastated the country’s pig population in 1996.

According to Dr Camille Doua, a veterinary specialist at Azaguire, a rural centre being run by the livestock ministry, 64% of the country’s pig population was wiped under the country’s 2001 civil strife and disease.

The on-going initiative by the ministry to boost pig production through artificial insemination is reported to have begun in February 2012 and is reportedly bearing positive results to benefit the country’s farmers and livestock keepers.

The pig farm is aiming to increase the number of pig breeders and to create breeding stock for the country which depends on agriculture for most of its foreign exchange earnings.

According to Doua, some of the positive results of the project include the pigs which have doubled piglet production.

“Before the project, our pigs used to produce about eight piglets per pig, but as of now, one pig is now producing about 14 piglets on average. These are the results of the interventions being carried out at this

Other noteable achievements scored at the centre include boosting pig meat production. Doua said that previously it took about 12 months to produce 80kgs of pig meat, but now due to the interventions

it is now taking about seven months to produce 100kgs of pig meat.

Other initiatives being carried out include deworming and vaccination exercises  to contain disease spread amongst the animals.

The programme to strengthen reporting and coverage of agriculture and food sectors in Sub-Saharan Africa was sponsored by the World Bank Africa region and World Bank Agriculture Global Practice.

The First Ivorian Civil War was a conflict in the Ivory Coast (also known as Côte d’Ivoire) that began in 2002. Although most of the fighting ended by late 2004, the country remained split in two, with a rebel-held Muslim north and a government-held Christian south.