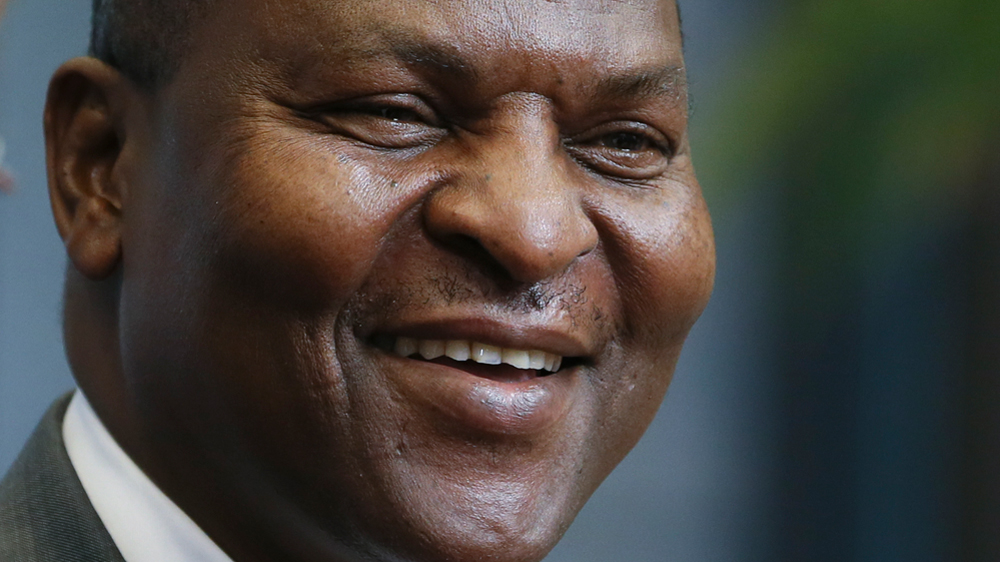 Faustin-Archange Touadera, the president of the Central African Republic (CAR) was elected in February in a peaceful election that many lauded as a first step towards restoring peace after years of sectarian violence.

He took office in March but his government is weak, has very little control outside the capital Bangui and is struggling to implement a disarmament, demobilisation and reintegration programme.

Al Jazeera’s Catherine Soi spoke to him in Bangui.

Al Jazeera: You got elected on a platform of peace and disarming and demobilising armed groups. How is that going?

Faustin-Archange Touadera: Peace and security is still our priority. For the past three years, our country has gone through a major crisis which has completely divided our people and a lot of crimes were committed. We had a successful election this year, sending a message to the international community and our local leaders that Central Africans want peace.

As we speak, we still have armed groups in the country. We’re in the process of negotiating with some of the groups to disarm, demobilise and be reintegrated back to the community. We’ve created a structure and committees to implement the programme. Representatives from the different groups will sit in these committees.

The international community is helping us push this agenda. We also need to restructure our national defence forces and also importantly we need reconciliation. This is our initial agenda and we’re already making good progress.

Al Jazeera: We’ve spoken to many people, including some rebel leaders, who say that the process seems to have stalled. What would your government ask for to jump-start the programme?

Touadera: We’re working with the United Nations and other partners. Such processes take a long time and need to be handled delicately. We need experience, expertise and patience to see this through. We also need financing. We have to identify all the combatants and only after the census is done can we begin the process of possibly rehabilitating and reintegrating them back to the community.

We’re also looking into the possibility of training some of them and assimilating them into the national forces if they are eligible and interested. For them to be reintegrated back to the community, they need to be prepared psychologically and we have to provide them incentives, like help them in agriculture for example.

The community also has to accept them back. All these elements must go hand-to-hand if there is going to be any chance of reconciliation. Our country has gone through very tough times and we have difficulties mobilising the resources to effectively do this and this is why we’re asking the international community to help.

Al Jazeera: You inherited a country that is basically on its knees, your government is still very weak – it doesn’t have a proper functioning army or police force. How is this aspect a hindrance to DDR (Disarmament, Demobilisation, Reintegration)?

Touadera: We have a constitution which is very clear. There is a single national armed force and the government has to ensure security and protection of its citizens. It’s not the responsibility of any armed group. We are restructuring the national army and there will be no room for armed groups after DDR. We will have a professional army that’s free from politics and ethnicity and will have the mandate to fulfill their mission which is national peace, protection of the territory and livelihood of citizens of Central African Republic.

Of course there are some groups that don’t want to be reintegrated back into the system but we can’t have it. It would mean total anarchy, total disorder. I believe everyone, every group we’ve been talking to agrees with our position. We don’t have two Central African Republics; we have one and we must be united.

Al Jazeera: What will happen eventually to the groups that refuse to disarm?

Touadera: I think we will not take a defeatist attitude. We’ll continue to discuss with each group to reach a desired end. There is no other way. Today, everyone in Central African Republic wants dialogue. I think peace is the desire of all Central Africans. We shall try to convince those who are still unconvinced on the importance of the peace process and how a vital key to this is laying down arms. It will be a transparent and inclusive process. We can’t be divided about rebuilding our country.

Aljazeera: Away from disarmament to another issue that is also making headlines. There have been many allegations of human rights abuses, including sexual violations against International peacekeepers in CAR. What is your government doing to protect the people, to put more pressure on the UN and troop contributing countries to expedite investigations and punish those found culpable?

Touadera: This is are a very serious matter which I and my government condemn in the strongest way. It’s important that the government is kept informed on such cases and we work together with the missions so that we’re able to go through the process of verification in an open way.

There must be justice for those whose rights have been violated. The government has been working with the United Nations on this. The ideal situation would be to involve the different nations who contribute troops to peacekeeping missions. They need to be engaged in the process. We will continue to work with these countries to make sure that their troops use their positions in the right way and not to cause harm. The government will continue working with relevant authorities and our local communities to make sure that this does not happen again.