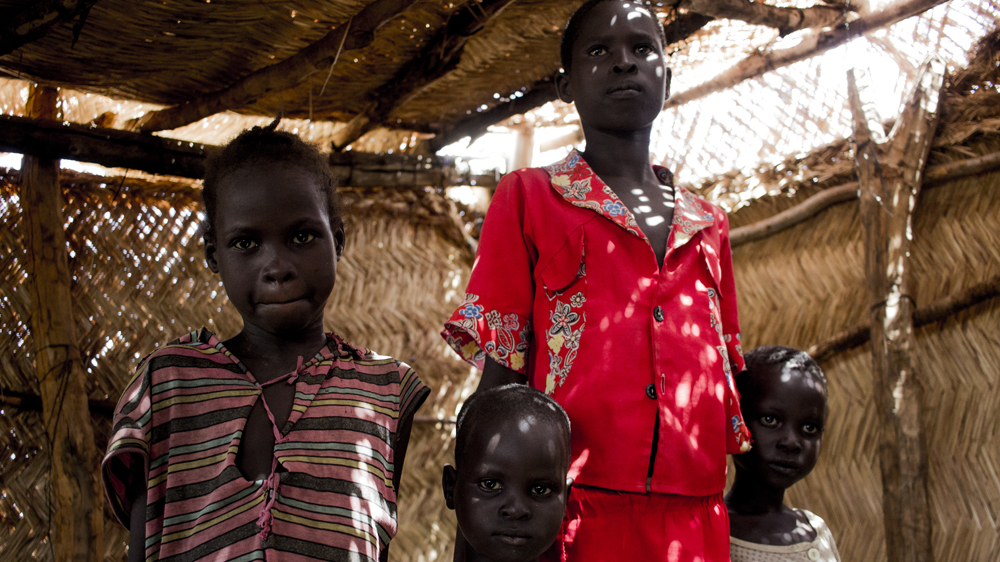 The UN World Food Programme (WFP) and UNICEF brought Al Jazeera to a mosque run by the Northern Bahr El Ghazal Islamic Council in the town of Majook, close to South Sudan’s border with Sudan, where the children are forced to live after their parents abandoned them to make the journey north alone.

WFP said 5.3 million people in South Sudan are at risk of acute hunger, nearly half the population, which is already causing deaths among the country’s most vulnerable, and increasing the number of people fleeing across the border to neighbouring Sudan.

Alalla Koka, one of the children living at the mosque, doesn’t know her exact age – but said she is about 13. Her father died during the two-year civil war that ended last year. Her mother left her and four siblings three months ago after slipping out of the house at night and across the border to Sudan.

“She left all of us, even the little one,” she said, referring to her youngest brother who is five.

Since she was abandoned, Alalla said she no longer feels any connection to her mother. Friends and relatives have not come to visit or offer assistance since she left.

“We have nothing to eat … We try to sell water in the market. Sometimes we get two or three pounds [10 cents], which we can use to buy some food.”

In the town’s market, shops are stacked with food products, but customers are nowhere to be seen. Local community leaders say the drought, which is now in its second year, means few were able to cultivate crops.

“When there are no crops to sell, there is no way to get money … The local community has no money to buy anything in the market,” one told Al Jazeera.

Traders from neighbouring areas, who would usually come to buy the excess food have stopped visiting the town, elders say.

In March, the Sudanese government decided to close its border with the South amid claims the government had been assisting rebels in Sudan, attempting to depose the country’s President Omar al-Bashir. Cross-border trade has been strangled by the closure, which has compounded the economic problems in Majook further.

Clashes between troops loyal to Kiir and those with Machar which took place in Juba over the weekend have now subsided after the president called a ceasefire. But problems for humanitarian organisations operating in Majook and other parts of the country are already being exasperated.

“Heavy fighting in Juba – including in the area where WFP’s office and warehouse are located – has forced tens of thousands of people to flee their homes,” said Challis Mcdonough of the WFP. “Some 3,000 have taken refuge inside WFP’s main compound, on the western edge of town.”

Fighting in South Sudan on eve of fifth anniversary

Rebeckah Piotrowski from Action Against Hunger, an NGO that operates throughout South Sudan, said: “[We are] deeply concerned by the recent heavy fighting in Juba, which has further complicated an already dire humanitarian crisis, and reduced our humanitarian access to populations in need.”

“The longer fighting continues and restricts humanitarian actors from delivering life-saving assistance to people in need, the greater the level of human suffering … We call upon the international community to do all in its power to restore calm and peace at this critical juncture.”

Reports suggest Germany, Italy, Japan, India, Uganda and Britain are evacuating citizens from the country in response to the fighting, many of whom work in development and as aid workers.

Parents, such as those in Majook who have no way to support their families in South Sudan, are heading to the north where the economy is said to be more stable and there are more opportunities to find work.

A local NGO worker in the town, who spoke on condition of anonymity, said: “It’s illegal to make the border crossing, so it’s much easier to do it without children.”

Osman Kiir al-Sheik, 49, is a local NGO worker with the Northern Bahr El Ghazal Islamic Council in Majook. He is in charge of the centre where the children live, which is little more than a large straw shelter. It relies on donations from people in the surrounding area to keep running.

“I have three challenges … to provide food, water and an education for these children … I hope one day they can be the leaders of South Sudan if they can be taken care of properly,” said Kiir al-Sheik.

“I would say to the parents, you love your child. You took care of them for a long time and then left because you became frustrated with hunger. I would still say to you, ‘come back and be with your child’.”

Malai is about 10 years old and from Warrap, a neighbouring region close to Majook. His father went to Upper Nile as a soldier during the conflict of 2013 to 2015, but never came back.

“My mother would go into town in the daytime,” he told Al Jazeera, “but she would always come back.”

However, one day two weeks ago, she did not return.

“I don’t know why she left, but I don’t think she will come back. If I could speak to her today I would ask ‘Why did you deceive me? … You didn’t even tell me [you were leaving].’”

In a local report on the plight of the children, Anyar Saudi, secretary for the Northern Bahr El Ghazal Islamic Council, said, “As a faith-based humanitarian organisation we were touched by their suffering, and that’s why we decided to take care of them.”

Community leaders in Majook say the abandonment of children on such a large scale is unprecedented. There are parallels with mass abandonments that occurred in Somalia in 2011, the last time the world saw a major famine.

In the current climate of deteriorating access to the region as roads become impassable for the rainy season, the evacuation of aid workers, and the ever-looming threat of a return to violence, the situation for those facing hunger in other regions of the country – including Unity State and Upper Nile as well as Northern Bahr El Gazal – is dire.

When asked about the future of the 300 children of Majook, Kir al-Sheik said: “Since the traders have stopped coming … even the begging opportunities have decreased … I don’t know what will happen to these children.”

UNICEF said it is trying to trace the children’s parents so they can be reunited, but the process is difficult and time consuming.