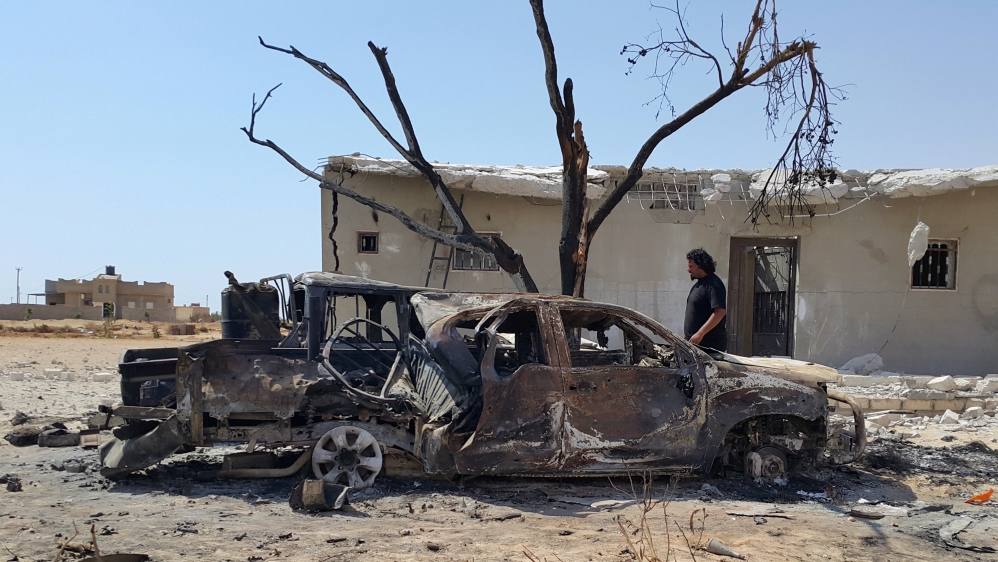 Clashes between two rival factions in Libya fighting for control of the eastern city of Benghazi have killed at least 19 fighters and wounded several more.

Forces loyal to Khalifa Haftar, a renegade general, clashed with fighters loyal to the Shura Council of the Benghazi Revolutionaries (SCBR).

At least 17 pro-Haftar and two SCBR fighters were killed, and more than 20 were wounded.

Haftar’s self-proclaimed Libyan National Army has carried out air strikes in Benghazi, under the control of the Shura Council of Benghazi Revolutionaries, including in the city’s Ganfouda district.

The attacks have endangered the lives of scores of detainees being held captive in Benghazi, according to Amnesty International, the international rights body.

Haftar and his forces have a strong presence in eastern Libya and have refused to recognise the UN-backed unity government.

The fighting in Benghazi came as a military commander in eastern Libya told AFP news agency on Thursday that French, British and US soldiers were reported to be in Libya to “monitor” the Islamic State of Iraq and the Levant (ISIL, also known as ISIS) group.

“French, American and British soldiers are in the Benina base” near Benghazi, said Saqr al-Jaroushi, whose forces are allied with a government based out of the eastern city of Tobruk.

Jaroushi said around 20 soldiers at the base were charged with “monitoring the movements of the Islamic State jihadists and how they store ammunition”.

“There are no [foreign] pilots fighting in the place of our pilots and fighters,” he said.

Other foreign military personnel carry out similar tasks across Libya, including in the capital Tripoli and in Misrata, a city in the west.

But Libya’s Government of National Accord (GNA) said on Tuesday it had summoned France’s ambassador to protest against the presence of French special forces in eastern Libya.

The summons came after France confirmed last week that three of its soldiers had been killed when a helicopter crashed near Benghazi.

Since the confirmation of the French deaths, there have been protests against both the French presence and the GNA’s leadership in Tripoli and Misrata.

The GNA said in a statement it “considered the French presence in Libya’s eastern region as a breach of international norms and sovereignty which it rejects”.

Fayez Seraj, the GNA head, demanded from Antoine Sivan, the French ambassador, an official explanation “about the truth of what happened”.

France and other Western powers have backed the GNA, the result of a UN-mediated deal signed in December. But the GNA has so far been opposed by Haftar and his allies in the east.

The confirmation of French special forces in Libya comes on the heels of the release of leaked tapes from the Benina air base, made public earlier this month, suggesting that British, French, Italian and US forces have been coordinating air strikes in support of Haftar.

Last year, Haftar launched a self-declared campaign to drive rebel fighters, including an al-Qaeda-affiliated group, from Benghazi. He refuses to support the UN-backed government because his forces were once loyal to a rival government.

Elsewhere, Libyan forces said they have recaptured Sirte from ISIL. The advance came after heavy fighting leading up to the weekend, which killed dozens of people.

Families are returning to the city after spending months away to escape violence.

ISIL had controlled the city since late last year.

Though a recent lull in fighting allowed businesses to reopen, a heavy security presence remains to ensure ISIL fighters do not return.

Sirte was ISIL’s most important base outside Syria and Iraq; its loss would be a major setback for the group.