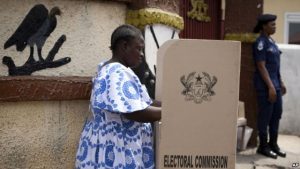 FILE – A woman fills in her ballots in presidential and parliamentary elections at a polling station in Accra, Ghana, Dec. 7, 2012. The electoral commission of Ghana has dismissed local media reports that the electoral body is not fully prepared to organize the anticipated November 7 presidential, parliamentary and local elections.

The electoral commission of Ghana has dismissed local media reports that the electoral body is not fully prepared to organize the anticipated November 7 presidential, parliamentary and local elections. This as parliament discusses an electoral amendment bill that will change the regular election date from December 7 to November 7.

In their recent deliberation, some parliamentarians expressed concern that the electoral commission might not be ready to administer the polls on November 7 following meetings with residents of their constituencies and other election stakeholders.

But, in an interview with VOA, Eric Dzakpasu — spokesman for the electoral commission — says the electoral body is implementing measures to ensure it is prepared to organize the polls.

Last week, the electoral commission began expunging the names from the voter list those who registered using their National Health Insurance Scheme identification card following an order from the Supreme Court. The electoral body says it will now re-register the affected prospective voters.

“We have rolled out the roadmap for the re-registration and the exhibition of the register of those whose names have been deleted. So, what we said is that from the 18th of July to the 28th of July all persons who were affected by the deletion would have the opportunity to register at the various district offices of the electoral commission. Then from the 5th and 7th of August , the register would be exhibited and together with the provisional register we have now, would be certified for the election if it is approved on the 7th of November,” said Dzakpasu.

Spokesman Dzakpasu said the electoral commission is working with stakeholders including the political parties to address their concerns before the elections. This, following a meeting with the parties and their representatives at an Inter-Party Advisory Committee (IPAC) meeting in the capital, Accra, last Tuesday.

“We rolled out all these programs and we had a unanimous approval. None of the political parties rejected any of the programs that we submitted. They even wanted a timetable for our election should it come on the 7th of November, and we have even submitted soft copies to them. So the relationship, if what went on at the IPAC is anything to go by, is very cordial and very understanding,” said Dzakpasu.

“Our activities, our procedures are time bound, they are regulated by the electoral laws and every activity is scheduled to take place at a particular point in time,” he said.  “We have explained to the Ghanaian public that we are focused and that if parliament approves of the election [date], as usual we shall conduct a free fair and a credible election on the 7th of November. The most critical thing we are left to do now is to clean the register and the exhibition marks a critical period in the cleansing of the register. That is why this year’s exhibition exercise has been extended to a period of 21 days, instead of the normal 14 days that we do the cleaning up and updating the register.”