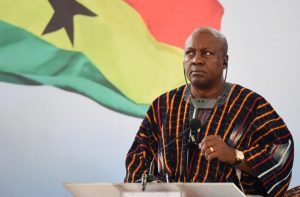 Ghana has begun offering visas upon arrival to all African nationals, a step towards creating a continent-wide zone of free movement.

The West African country rolled out the policy on Friday, allowing citizens of African Union (AU) member states to get visas for up to 30 days upon arriving in the country. Fifty-four African countries are members of the AU—the only country not in the bloc is Morocco, which resigned its membership in 1984 due to a row over the disputed territory of Western Sahara.

Ghana already allows visa-free travel for citizens of countries belonging to member states of the Economic Community of West African States (ECOWAS)—a regional economic bloc consisting of 15 countries including Nigeria, Africa’s biggest economy. ECOWAS citizens will not be affected by the new policy.

It marks a step towards the vision outlined by the AU in its Agenda 2063 policy document, which includes the abolition of visa requirements for all African citizens in all the continent’s countries by 2018. The AU is also introducing an African passport at a summit in the Rwandan capital Kigali in July, which will initially be available only to heads of state, government ministers and permanent representatives of member countries at the AU. The AU eventually wants to roll the passport out among all African citizens.

Ghanaian President John Dramani Mahama announced the policy in his state of the nation address in February, saying that the measure would “stimulate air trade, investment and tourism.” The decision was commended by AU Commission Chairperson Nkosazana Dlamini-Zuma, who said that she was convinced “many other African countries will follow suit, in the interest of achieving an integrated, prosperous and peaceful Africa.”

But while welcoming the measure as potentially leading to increased air traffic into Ghana, airline operator Gloria Wilkinson warned that the country would have to ensure its security measures were tight to prevent possible abuse of the system. Wilkinson, the country manager of South African Airways, told Ghana’s Citi Business News that she was “confident that [the] government has considered the security aspect of such an initiative.” A leaked memo from Ghana’s Immigration Service suggested that Ghana and Togo were the next targets for militants following attacks in Mali, Burkina Faso and Ivory Coast since November 2015.