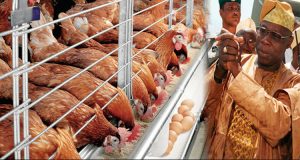 LONDON (Thomson Reuters Foundation) – The image of African farming as a route only to dead-end poverty must be challenged to stem the exodus of migrants to Europe, a former Nigerian president said.

“What does a young man want? He wants the ‘bright lights’. And why can’t he have those bright lights and be a farmer?” Olusegun Obasanjo told the Thomson Reuters Foundation.

Obasanjo, a two-time Nigerian leader, said giving land to young people and investing in a modern agricultural industry will lessen the lure of migration and help safeguard against radicalisation by militant groups such as Boko Haram.

Governments must change perceptions of farming as “condemnation to poverty”, and promote farming idols to rival celebrity rappers, said the 79-year-old, who helped smooth Nigeria’s transition from military dictatorship to democracy.

“People see role models in rapping or singing or entertainment,” he said. “And we have to make them also say: ‘Yes, I can be a farmer, and I can have the ‘glitz’.”

Obasanjo, a regional political heavyweight, said by redistributing land, governments can provide an asset that allows young people to raise finance to invest in the tools required by modern agribusiness, including machinery, high-yielding seeds and fertilizers.

Speaking on a recent trip to London, he said European leaders should question why young Africans would want to make the perilous journey across the Mediterranean, and should help African governments offer alternatives at home.

“Trying to deal with migration in Europe is curing the symptom rather than curing the disease,” he said in an interview. “The disease is either the result the conflict in Africa or the result of poverty and unemployment for the youth.”

Obasanjo said he has himself returned to farming, which he left as a young man to join the army, and later embark on a career in politics.

The son of a farmer from Nigeria’s southwestern Ogun State, he casts himself now an advocate for farming as a reliable economic motor for Africa.

Obasanjo is the current chair of the Africa Food Prize, an award recognising innovations in the continent’s agriculture sector.

He said he believes agriculture can become a less volatile alternative to oil revenues which account for about 70 percent of Nigeria’s national income.

Africa’s most populous nation is faced with the continent’s fastest population growth and official statistics which claim one in two 15 to 24-year-olds is out of work – while experts say real numbers could be much higher.