As a prelude to the second U.S-Africa Business Forum, Gallop World Poll and the FEEDS Advocacy Initiative will be hosting a forum for African diaspora small and medium size on July 14, in Washington, DC. FEEDS CEO Ambassador Robin Sanders says in addition to sharing data which will set the stage for high level meetings, the event will also offer a platform to highlight the contribution of African Diaspora SMEs to the development of the continent. Sanders, a former U.S Ambassador to Nigeria also sheds light expectations for the for the second U.S –Africa Business Summit and possible areas to broaden U.S African business ties in the last months of the Obama Administration.

The primary objective of the Africa Diaspora SME Business Forum is to foster dialogue, collaboration, and to share key data on U.S.-Africa key topics in advance of President Obama’s upcoming U.S.-Africa business forum.

How do you situate the importance of the event in the context of business ties between the USA and Africa?

The Africa Diaspora SME Business Forum represents a key step forward for high-level meetings in sharing key data on U.S.-Africa business relationship. The event also provide a unique platform to highlight the role that Africa Diaspora Small and Medium Size Enterprises (SMEs) are and can play in contributing to Africa’s development. As you know, economic development through job creation is a critical element to respond to Sub-Saharan Africa’s growing population, particularly its youth bulge of approximately 500 million young people of working age and Africa SMEs’ can provide these jobs as well as help increase the gross domestic product (GDP) for their nations as well as the Continent writ large.

If we look back at the 2014 US-Africa Business Forum, what would you say it achieved, did Africa benefit anything from it?

A major accomplishment of the 2014  U.S.-Africa Business Forum was the commercial diplomacy that deepened economic relationship between the United States and African countries, particularly the range of business deals that were signed during the event. However, on a broader scale, the Forum not only connected more US and Africa business persons, but it also sent a clear signal to American investors that the Continent of Africa was open and ready to do business with U.S. businesses.  In addition out of the last Forum, the President launched his Doing Business in Africa Council (PAC-DBIA) which provides him key recommendations on strengthening U.S.-Africa business ties. Attendees at the Gallup-FEEEDS July 14, 2016 event will hear more about PAC-DBIA, the President’s second Business Forum coming up on September 21, 2016, and what sectors might be best for Africa SMEs to do business. Gallup, FEEEDS, and event partners Allafrica.com and GB Group Global are please that the Special Advisor to the President, Ms. Catherine Byrne will also be speaking at the event on many of these issues.

Who are those expected at the event and what is the outcome that FEEDS is looking forward to?

As you know ,this is the third year that Gallup and FEEEDS are putting on this event  at Gallup’s Washington. D.C. headquarters, and that is thanks to its Managing Partner, Jon Clifton, and his team.   Other esteemed speakers are  Alicia Robinson-Morgan, Deputy Director of the Africa Office at the U.S. Department of Commerce; Leila Ndiaye, Africa Policy Director, U.S. Chamber of Commerce, Rahama Wright, President’s Doing Business in Africa Council & CEO-Shea Yeleen, and Dr. Raymond Gilpin of the Africa Center for Strategic Studies. Gallup will also highlight its key polling data on political and economic conditions as expressed by African nationals. The U.S. Small Business Administration (SBA), and USAID will also present on key programs their agencies have that can assist Africa Diaspora SMEs.

It is our understanding that this is the third annual U.S-Africa event sponsored by Gallup and FEEEDs, how have previous events gone and what innovations should participants expect at this year’s event?

The past Gallup-FEEEDS event have all been topical based on what is going on that the partners think is the most relevant subject issue at the time. The last Gallup-FEEEDS event focused on the 10 or more elections which were going to be held on the Continent in the 2015-early 2016 period. In 2014, the focus was on the US-Africa Head of State Summit and its attendant US-Africa Business

The Obama Administration has about six months left in Office, what can there do besides the Business Forum to cement its African legacy?

It will be interesting for me to hear at the upcoming Gallup-FEEEDS-Allafrica.com Forum from the speakers some of the key legacy issues they see that will go forward. The things that I see that are so important to continue would be: Power Africa, FEED the Future, The Young Africa Leaders Initiative, the U.S.-Africa Business Forum, assistance in setting up an Africa-like Center for Disease Control (which is already underway as a result of the Ebola outbreak), and the Global Entrepreneurship Summit — are the things that come to mind for me. Of course the success of the Obama Administration ensuring that the African Growth and Opportunity Act (AGOA) has been extended for another 10 years is part of the legacy. AGOA was something I worked on when it was first envisioned in 2000, so I see AGOA as such an important framework to have for the next 10 years.

Besides the July event, what other initiatives will FEEEDS be working on for the rest of the year?

FEEEDs as you know is an acronym that encompasses some of the main global issues of today–Food Security, Education, Environment-Energy, Economics, Democracy-Development and Self-help, and it mostly works in Africa and with Diaspora groups working on the same issues, and providing a platform for these issues to be discussed .  FEEEDS serves as a global advisor to several Diaspora groups looking at strategies   to address economic development issues on the Continent. On tap next is the upcoming United Nations’ week of activities and participating in climate change meetings. 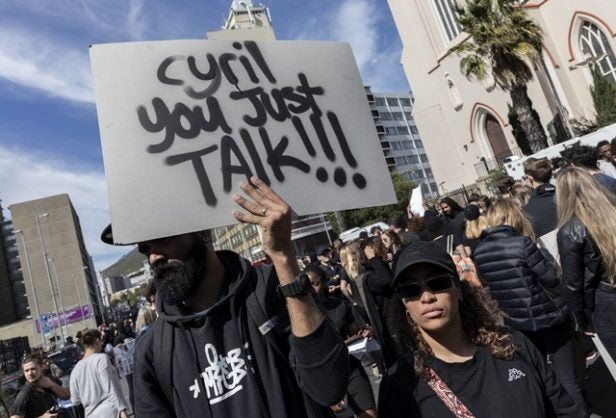