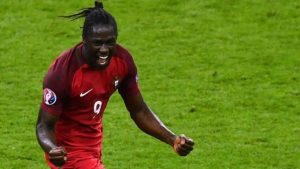 The winning goal of the Euro 2016 final was scored by a substitute in extra time – the culmination of an extraordinary life story.

Eder Lopes, 28, scored for Portugal against France but was born in the West African country of Guinea-Bissau and grew up in a care home.

Many were surprised at his winning contribution – not least Portugal’s coach Fernando Santos.

After the match he gave this back-handed compliment: “The ugly duckling went and scored. Now he’s a beautiful swan.”

Eder was not even meant to be playing in the game.

Had Portugal captain Cristiano Ronaldo not suffered a knee injury and been carried off on a stretcher in tears, Eder would probably have remained on the bench.

But in the 109th minute of the final, with a penalty shoot-out looming, he took the ball about 30 yards from goal, went past French defender Laurent Koscielny and hit a ferocious shot past goalkeeper Hugo Lloris.

It was the only goal of the match.

This was not the first time his life had taken a surprising turn.

Eder was born in the former Portuguese colony of Guinea-Bissau but moved to Portugal as a toddler.

In an interview for his old club Swansea City he describes the journey.

“I moved to Portugal when I was two years old, so I don’t remember living in Guinea-Bissau. 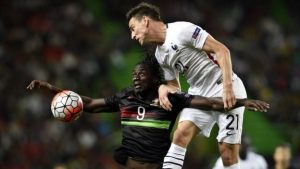 “My family moved to Lisbon so that we could live in better conditions and have a better way of life.

“My father was already living in Portugal, so I moved over with my mother.”

But then, ESPN says his parents were unable to take care of him.

“I didn’t really grow up with my family,” he said.

At the age of eight, he moved away from his family to the Sunflower Care Home in Coimbra.

Eder was often in trouble there because of his love for football, says ESPN.

“I always played football in the streets with the other kids from my college,” he recalls.

“Every day and everywhere, if we had a ball, we would just play football.”

“Finally his talent was recognised,” says ESPN, and he was allowed to attend a local academy.

He was brought into the Coimbra-based ADC Ademia academy, where his talent was nurtured before he made his senior debut for Portuguese fourth tier club FC Oliveira do Hospital, says Swansea city’s site.

At 18, Eder signed his first contract at the Portuguese second division club Tourizense for a monthly salary of 400 euros ($440; 贈340).

This salary, ESPN adds, “he duly sent to his mother”.

His worth rose until at one point, while playing for Portuguese premier league club Braga, he was given a contract with a release clause of 30m euros.

ESPN said he had a lifelong dream of playing in England but, says in February 2013 “disaster struck”.

He was being eyed up by English premier league clubs, including Tottenham Hotspur, but he tore his cruciate ligaments.

Braga, in the end let him go for “a much lower fee” to Swansea.

He failed to score at Swansea last season and in May he left for France, as ESPN put it “disappointed and heartbroken”.

So scoring the winning goal in Euro 2016 may well have changed Eder’s fate.

But, if Eder’s prophetic Facebook post from 14 June, the day of Portugal’s first match in the Euros, is anything to go by, then he is not surprised himself.

“Go ahead, underestimate me,” it said.