Around 23% of Ethiopians suffer from the insidious worm disease schistosomiasis 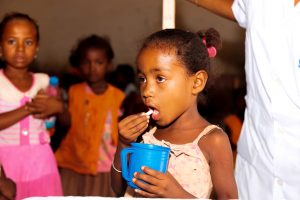 Merck , a leading science and technology company, today announced that the largest delivery of praziquantel tablets ever shipped to Ethiopia recently arrived in Addis Ababa, the capital of the East African country. Ethiopia has received around 14 million tablets for mass distribution to school children. According to the World Health Organization (WHO), Ethiopia is one of the most endemic countries for schistosomiasis worldwide. It is estimated that around 23% of the overall population (23 million people) requires treatment. Ethiopia has been participating in the Merck Praziquantel Donation Program since 2012 and has received around 43 million tablets to date.

“We want to contribute to eliminating the insidious worm disease in order to help infected children to take part in the economic development of their home countries. With our donation of approximately 14 million tablets to WHO for Ethiopia approximately six million school children can be treated – covering half of the country’s school-aged population in need of treatment. This shows that we are on the right track. However, we know that we alone cannot solve the problem with our tablets,” said Chokri Ahmadi, General Manager of Merck for Ethiopia, Sudan and the French-speaking countries in Sub-Saharan Africa.

As part of its responsibility for society and within Health, one of its corporate responsibility strategic spheres of activity, Merck is supporting WHO in the fight against the worm disease schistosomiasis in Africa. Since 2007, more than 74 million school children, have been treated. To this end, Merck has donated over 340 million praziquantel tablets to WHO. Praziquantel is well tolerated and the most effective treatment to date for schistosomiasis. Merck is also supporting educational and awareness programs in Africa, developing schistosomiasis therapies for very young children and cooperating with partners in the Global Schistosomiasis Alliance.

Schistosomiasis is a chronic condition and is one of the most common and most devastating parasitic diseases in tropical countries. It is estimated that 260 million people are infected worldwide and that around 200,000 die from it each year. Flatworms transmit the chronic disease. It is widespread in tropical and subtropical regions where large sections of the populations have no access to clean water and sanitary installations. People become infected with the disease by worm larvae mainly in freshwater, for example while working, swimming, fishing or washing their clothes. The miniscule larvae penetrate human skin, enter the blood vessels and attack internal organs. The infection rate is particularly high among school-aged children. Praziquantel is the only active ingredient with which all forms of schistosomiasis can be treated. WHO has therefore deemed praziquantel, the most cost-efficient solution for the health of patients in need, as the drug of choice.

Merck initiated the Praziquantel Donation Program in cooperation with WHO back in 2007. Since then, more than 340 million tablets have been donated and over 74 million patients treated, mainly school children. Merck has committed itself to maintaining its efforts in the fight against the tropical disease until schistosomiasis has been eliminated. To this end, Merck is donating up to 250 million tablets per year to WHO. The planned annual donation has a value of around US$ 23 million. In addition, Merck is supporting an awareness program at schools in Africa in order to educate children about the causes of schistosomiasis and ways to prevent it. Furthermore, as part of a public-private partnership, the company is researching a new formulation of praziquantel that can also be administered to very young children. To date, the tablets are only suitable for children older than six. At the end of 2014, Merck founded the Global Schistosomiasis Alliance together with partners such as the Bill & Melinda Gates Foundation and World Vision International.

Merck  is a leading science and technology company in healthcare, life science and performance materials. Around 50,000 employees work to further develop technologies that improve and enhance life – from biopharmaceutical therapies to treat cancer or multiple sclerosis, cutting-edge systems for scientific research and production, to liquid crystals for smartphones and LCD televisions. In 2015, Merck generated sales of € 12.85 billion in 66 countries.
Founded in 1668, Merck is the world’s oldest pharmaceutical and chemical company. The founding family remains the majority owner of the publicly listed corporate group. Merck, Darmstadt, Germany holds the global rights to the Merck name and brand. The only exceptions are the United States and Canada, where the company operates as EMD Serono, MilliporeSigma and EMD Performance Materials

I haven’t got useful tips from Jonathan – Buhari