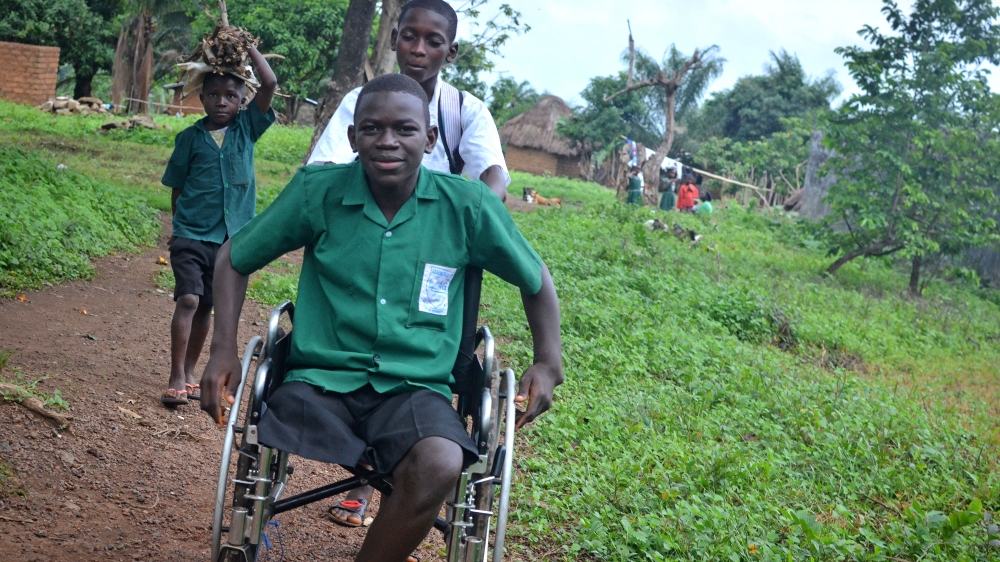 Yenga, Sierra Leone – When Save the Children found David Nyorkor in November 2014, he had been locked in his bedroom for six weeks.

It was at the height of the Ebola epidemic and Yenga, a small village along Sierra Leone’s eastern border with Guinea near the epicentre of the outbreak, was devastated.

David had contracted an unknown illness long before Ebola swept through the village and killed nine members of his family. But accurate information about the disease was scarce and superstition was rampant, so community leaders locked him in a bedroom in his empty family home, where he remained until Save the Children arrived.

“I tried to get out but I was never able, so I stayed in the room, in bed always,” remembers David, who is now 15 years old.

“Then Save the Children came to the village and asked for all the children who didn’t have parents,” David explains. “They took my name and after two days they brought me to Freetown. I was sick and saw no other way, so I was happy. I thought they would give me a new life.”

But, more than 18 months after he was rescued, David is back in the same community – only now, he is disabled.

A victim of a health system decimated by the Ebola epidemic and an overwhelmed international relief agency, David’s leg had been amputated – unnecessarily.

Convinced that the six weeks he had spent in isolation in his room in Yenga had ruled out any possibility that he may have had Ebola, Save the Children took David to Connaught Hospital in Freetown instead of to an Ebola treatment centre for observation.

The hospital had been overwhelmed for months by the city’s high rate of Ebola infections and, two weeks after he arrived, junior staff at the hospital went on strike following the deaths of three doctors to the disease in just two days.

By the end of the month, the diminished Connaught Hospital staff announced that they were unable to diagnose David’s condition. Large sores had developed on his left arm and right leg, and with the only pathologist in the country preoccupied with Ebola cases, hospital staff recommended that his leg be amputated before further observation.

Save the Children, fearing David’s life was in danger due to the spreading sores and delays in administrative processes, agreed. “At the beginning the process was out of our control because it required a lot of back and forth, getting consent from the family, getting doctors to do samples,” said one Save the Children employee who wished to remain anonymous.

“Doctors wanted permission to do laboratory analysis, and that took a lot of consulting and back and forth. Ultimately [the amputation] was a decision made at our country office.”

Fatima Sia, one of David’s aunts who had brought him meals while he was confined to his room, travelled with him to Freetown and provided consent for the operation.

Sia says that at the time she was under the impression that David’s illness had been identified and that amputation was the only treatment. It wasn’t until after David recovered from the operation that she realised he didn’t yet have a diagnosis.

Save the Children contracted an American social worker, Teresa Brooks, to handle the case. David met Brooks, a former case worker for the Nevada juvenile corrections system, in January 2015, following his amputation and release from hospital.

Save the Children arranged for David and Sia to live in a spare bedroom in a local family’s house while observation continued, and Brooks visited David several times a week to take him to his weekly check-up, deliver medication and assist him with physical therapy.

“Things only continued to get worse after his leg was amputated,” Brooks recalls. “What tests were available we ran. At one point we got a false-positive on a tuberculosis test and ended up treating him for that for the next six months without improvement.”

By December 2015, almost a year after his amputation, it was apparent that the tuberculosis diagnosis was incorrect, and David’s doctors recommended that his arm and other leg be amputated as well.

This time, however, those at Save the Children responsible for his case, weary of the previous misdiagnosis, did not consent to the amputations and arranged for samples from the sores on his body to be sent to a pathologist outside the country in order to identify his illness before taking any further action.

The results showed that David was suffering from a severe bacterial infection. He was treated and cured shortly after his diagnosis.

‘Your time is up’

After he had recovered from the infection, David says, he was told by a number of Save the Children employees that the funding for his case had run dry and he would have to return to Yenga.

“They always asked me if I wanted to go back to Yenga or stay in Freetown, and I told them I wanted to stay,” David says. “I was getting enrolled in school, but they kept saying, ‘Your time is up, your time is up.’ I was very sad.”

David was sent back at the beginning of February. According to Brooks, he wouldn’t even have had a wheelchair had she not convinced a local hotel owner to donate one.

Frustrated by the decision to return David to Yenga, Brooks chose to end her year-and-a-half-long relationship with Save the Children and returned to the United States.

“You can’t take someone out of a situation only to put him right back in it without providing him with at least the means to be productive,” Brooks says. “And in this country, to be brought back an amputee, his chances of making a life on his own are incredibly small. There are so many things that could have been done to better this kid’s situation and I don’t think nearly enough was.”

In a country where a disabled person is far more likely (PDF) to experience unemployment, social exclusion, violence and abuse, David faces significant challenges in his future.

Falling ‘through the cracks’

Although Save the Children’s policy restricts her from addressing specific cases, Deanne Evans, the organisation’s child protection manager, spoke generally, explaining that “there were a lot of competing demands, and of course in all of that, children fell through the cracks”.

“You try to do your best in terms of balancing, and for some that works out well, and for others it doesn’t. It’s very unfortunate, but not at all surprising given the chaos of that situation, that some children just didn’t get the support they needed at the time they needed it most.”

Today, David is living with Sia in Koindu, a small town south of Yenga, in a house a stone’s throw from his school. Sahr Andrew, a local teacher, offered David the spare room in his home a month after he returned to Yenga.

“I knew I had to do something,” Andrew says. “His situation is tragic. First and foremost, a kid being handicapped in this country is extremely tragic in itself. It would be too painful for him to come from Yenga every day, and it would cost too much money to hire a motorbike for him. Since I live so close to the school, I thought it wise I give him that assistance.”

Unfortunately, the assistance Andrew is able to provide doesn’t go much further. The school is rarely open five days a week, he explains, because like many teachers in Sierra Leone, he has never been paid by the central government and maintains a farm to feed himself and his family.

Save the Children used to provide food subsidies to local teachers to ensure that the schools stayed open, but that programme ended when the Ebola outbreak began and funds were reallocated to deal with the outbreak and provide treatment for the ill.

Evans says she doesn’t know if funding for the programme will resume.

Although he isn’t receiving financial support, David is attending class when the school is open.

The time he spent out of the classroom meant that he had to resume his final year of primary school. A community-wide agreement allows for primary school pupils to attend class for free, but he will have to begin paying school fees when he enters the junior secondary level next year.

“If I could have anything, it would be for someone to guarantee him an education, so I can focus on other tasks and he can have opportunity,” says his aunt Sia as Andrew translates for her.

“David is now a fatherless child and I lost people I rely on, too. I’m tied to David, taking care of him all day. I struggle to feed my own children, and now David,” Sia explains.

But David refuses to give into pessimism. He smiles and cracks jokes with his new family, and says that no matter how bad things get, he won’t let negativity take over his life.

Before Ebola he had dreamed of performing on stage, and that dream has changed only slightly: instead of dancing for people, he now dreams of becoming a DJ “so people can dance for themselves”.

“People with problems, serious problems, should know that no condition is permanent,” he says, sitting on the edge of his bed.

“No matter how bad things get, if no one is encouraging you, you can encourage yourself. You have to, otherwise you won’t make it through.” 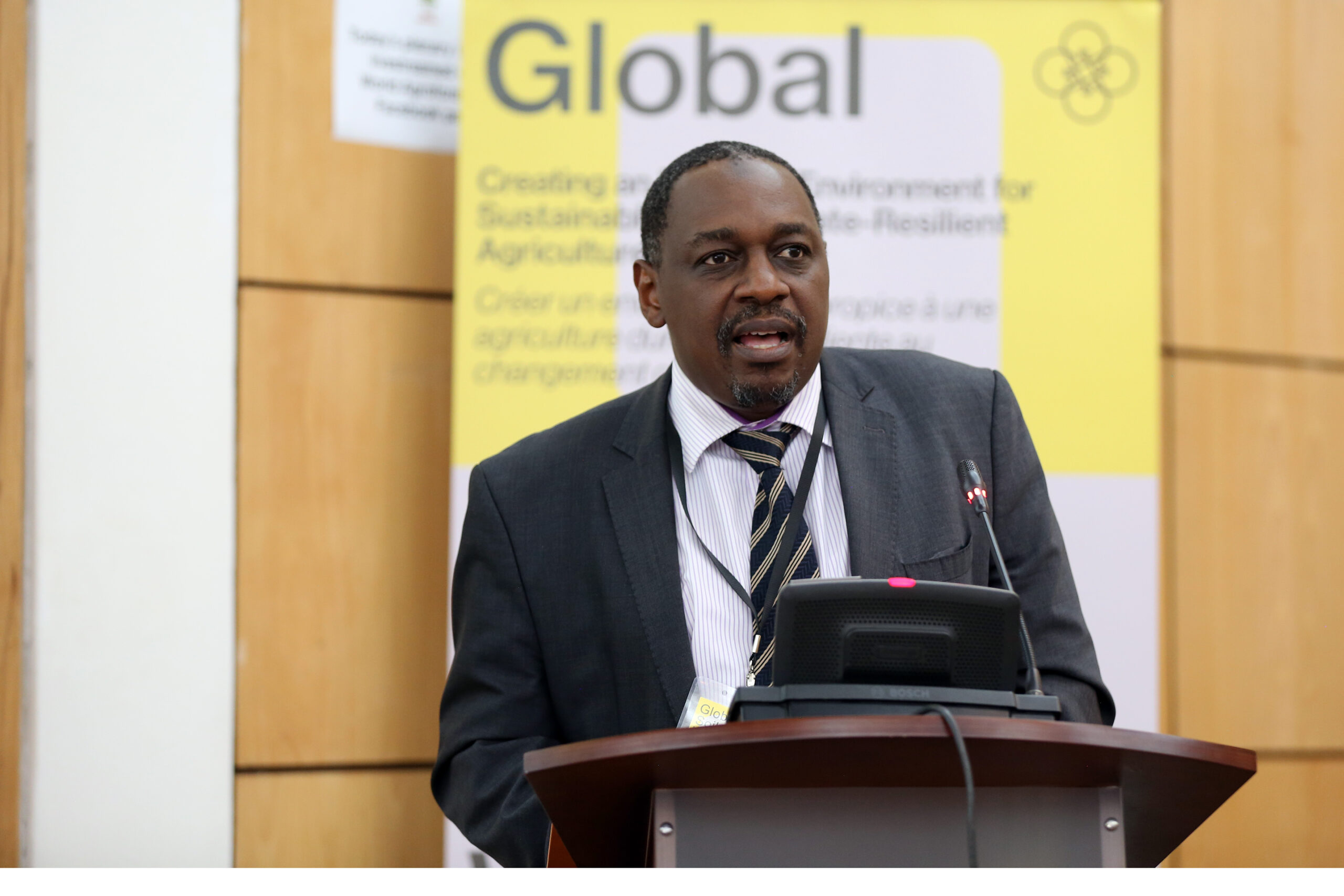 Kenya set to import 1 million tonnes of maize from Tanzania