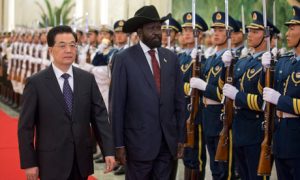 BEIJING, July 20 (Reuters) – China is sending its special envoy for Africa to the continent to help with efforts to resolve the political crisis in South Sudan, China’s foreign ministry said on Wednesday.

Zhong would meet “relevant parties” and discuss how to continue to support African mediation efforts and urge the factions in South Sudan to implement the peace agreement, it added.

“China has always been an active participant and staunch promoter of the peace process in South Sudan,” the ministry said.

China and other mediators had been in close contact to find ways for the waring parties to end the fighting and restart talks, it added, saying the situation in South Sudan was complicated and that international community should put more focus on it.

China National Petroleum Company (CNPC) said on Tuesday it had evacuated the bulk of its workers from South Sudan but its operations were unaffected.

Many foreigners have been evacuated from South Sudan, the world’s newest nation, which is still recovering from a two-year civil war that started in 2013, killing tens of thousands of people and driving more than 2.5 million from their homes.

The latest fighting erupted on July 7 and lasted for four days. It was between followers of President Salva Kiir and Riek Machar, the former rebel leader who became vice president under a deal to end the civil war. The violence killed at least 272 people.