The African Union summit meeting in Kigali will be voting for a new AU commission on Monday, despite rumors of a call for the election to be delayed.

There have been persistent rumors at the summit that the ECOWAS bloc of west African states is unhappy with the choice of candidates offered to succeed outgoing AU commission chairperson Nkosazana Dlamini-Zuma.

“Stop speculating.  There is no ECOWAS concern that has made an election to be postponed.  Elections are going forward tomorrow.  No more names are entering the list, while the elections are going on tomorrow.  If somehow we are not able to obtain the necessary majority then the rules will kick in and you will be advised as to the outcome,” Nmehielle said.

ECOWAS does not determine whether AU commission elections are held, he added.

AU rules say the winning candidate must obtain two thirds of member states’ votes.  Nmehielle explained that if no one wins this majority in the first round, the candidate with least votes will be knocked out and a second round held.

If a two thirds majority is still not obtained, he said, the election will be suspended pending another vote and an interim chairperson appointed.

One journalist questioned the democratic credentials of some of the candidates’ home countries.  Nmehielle declined to comment.

Germany to apologise and admit massacre of 100,000 Namibian tribesmen was a genocide considered a precursor to the Holocaust 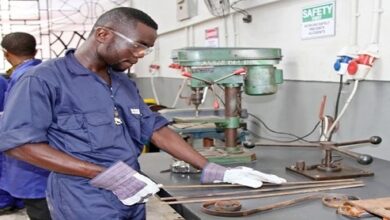