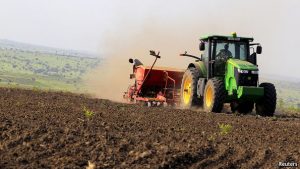 My other car is a Porsche

AFTER half an hour poking around Martin Shem’s farm, Paul Kavishe is impressed, even a little jealous. “He has done well,” says Mr Kavishe. “He’s a real farmer!” This is strange praise, not because Mr Shem’s dairy, maize and mango-growing operation on the outskirts of Morogoro is not admirable, but because both men have had university careers. For middle-class Tanzanians, though, a successful farmer trumps a successful academic.

“Every Tanzanian is a farmer,” explains Ali Aboud, another professor who has moved into agriculture. He cultivates about 20 hectares of rice paddy; in the past three years a businessman from Dar es Salaam and another city-dweller have bought big farms near his fields. These men are part of a quiet, hard-to-track but momentous change in Africa, which has profound consequences for the continent’s most important industry.

Surveys show that most farms in sub-Saharan Africa are smaller than two hectares. But that is the wrong way of measuring agriculture, says Thomas Jayne of Michigan State University. Look at land rather than farms, he says, and it is clear that a fairly small number of farmers now own a large portion. The fastest growth is among the middle class. In Ghana, 38% of agrarian land is occupied by farms of between five and 100 hectares; in Zambia, 52% is. In both of those countries, and also in Kenya and Malawi, medium-sized farms collectively take up more land than larger ones, whether those are owned by rich Africans or the foreign investors who are often accused of “grabbing” land.

Mr Jayne and other researchers find that in Kenya, Malawi and Zambia (though not in Ghana) most medium-sized farms were not built by successful smallholders but bought by urbanites. In Tanzania, where about one-third of the population is urban, city-dwellers are thought to own 33% of the farmland, up from just 12% a decade ago. Typically, the new farmers are middle-aged public-sector workers. The popular obsession with foreign land grabs is wrong-headed, says Isaac Minde of Sokoine University of Agriculture in Morogoro. If there is a land grab in Africa, it is being done by African urbanites.

City-dwellers are going into farming partly because legal reforms have made buying land easier and ownership a little more secure. Another reason is that urban growth is making crops and meat more valuable. Still another is the weakness of African manufacturing, which means city-dwellers lack good places to invest their cash. Most important of all, public-sector jobs seldom pay enough to sustain an upper-middle-class lifestyle. Mr Kavishe, who grows maize and keeps several thousand laying hens, is surprised to be asked whether he earns more than he did as a university administrator. Of course the chickens are more lucrative.

Urban farmers often bring new ideas and technology to the places where they settle. Raphael Laizer, a government official who moved into farming, remembers paying smallholders to plant maize on his fields, insisting on precise distances between seeds. Soon the smallholders were planting their own fields the same way. Mr Aboud, the rice farmer, introduced his neighbours to mechanised seed drills (“for the first two years everyone just looked on”) and to a high-yielding hybrid seed known as SARO 5. Urban farmers’ tractors are hired by smallholders to process maize or plough the fields.

The new arrivals tend to be highly literate, legally savvy and assertive. That cuts their neighbours both ways. When it comes to procuring public goods, their bullishness is a boon. Some of Morogoro’s urban farmers are harrying local authorities to invest in irrigation schemes, which would boost overall productivity. Mr Kavishe even tried to persuade the Finnish government to chip in.

But the high-powered interlopers can be unpopular, especially in crowded rural districts. In addition to his farm near Morogoro, Mr Shem owns a large cattle ranch upon which smaller farmers have encroached, leading to court cases and what he calls “psychological warfare”. Much of Africa is moving away from communal land ownership towards the individual kind, but only gradually, leaving a lot of room for confusion and fights.

Tanzania’s urban farmers also have one foot in the old Africa and another foot in the new one. They are mostly the children of farmers and found it easy to return to the family line. Yet these men are not quite following their parents. They have bought little if any land in their ancestral villages, and do not expect to return there (“you go back when you are buried,” says Mr Aboud). Instead they farm close to the cities where they made their careers. Several predict that their children will have no interest in farming. They are a transitional generation. In a strange way, the rush to acquire farmland shows that Africa is becoming properly urban.