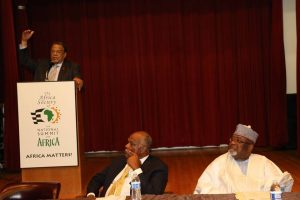 WASHINGTON D.C. —On June 23, 2016, at the Embassy of the Republic of Ghana, over 150 people attended a lecture given by Ambassador Andrew Young. Present were His Excellency LT. General Joseph Henry Smith, Ambassador of Ghana; His Excellency Tièna Coulibaly of Mali; His Excellency Babacar Diagne of Senegal; His Excellency Ammon Machingambi Mutembwa of Zimbabwe; the Reverend A. Russell Awkard from Louisville, Kentucky; and representatives from governments, communities, civil society, the African Diplomatic Corps, academia, and the private sector.

In his lecture, titled Africa: Yesterday, Today and Tomorrow—A Perspective, Ambassador Young emphasized his optimism about the continent’s continued sustainable economic growth, highlighting its emergence as a center of world markets, trade and investment. He stated, “I think we have been so bogged down with everybody talking about Africa’s problems, they really don’t get the point that Africa is the future.”

Now home to 1.2 billion people, the continent’s population will reach 4.5 billion by the turn of the century. Nigeria, which now contains 18% of the world’s people of color, will lead with an increase of 25%. It will take its place as the world’s third largest country behind India, which is likely to have several decades of growth, and China, which is set to experience a slight decrease after 2030. Nigeria’s population is also projected to surpass that of many other nations, including the United States, by about 2050. This evolving demographic dynamic will have a global influence, promising a large emerging consumer market and an unprecedented labor force.

Young also noted that we must stop denying the risks posed by climate change. Extreme events like the fires in California and the hurricanes and tornadoes in the Mississippi Valley are becoming more frequent and intense. Since the deforestation of Brazil, the largest rain forests on the planet belong to Gabon, Congo Brazzaville, and the Democratic Republic of the Congo. Moreover, elephants and other animals that used to migrated from Zimbabwe to the swamplands of Botswana and on into Angola has ceased. Young spoke against deforestation, mining and interference with animals, and warned that we must protect and restore Africa’s environment before tackling its economic and industrial issues.

To improve the continent’s future, Ambassador Young believes that we must draw on the opinions of Africans themselves. He gave the example of the conditions in South Africa, which could not have changed without the wisdom of leaders like Julius Nyerere, Kenneth Kaunda, Samora Machel, and Olusegun Obasanjo, who conceived of the concept of the Front Line States that galvanized the country’s liberation. When President Carter first appointed Young United Nations ambassador, Carter told him that rather than imposing conditions, Young should ask African leaders what they expected of the administration.

Ambassador Young also recommended using science-based technology to meet Africa’s agricultural needs, most notably via aquaponics, a food production system that combines raising fish and cultivating plants in water. He considers this model to be inexpensive, efficient, fast, and directly applicable to Africa. Young also said there is more money in the world today than ever before, but that it is sitting around doing nothing.

The lecture was followed by a Q&A session, which included a discussion on how to protect Africa’s people, the need to treat the continent justly, the security situation in Mali, and what the U.S. can do to promote peace in the Sahara.

At the conclusion of the lecture, Pamela Bridgewater, CEO and Chairman of the board of the Africa Society, and Luddy Hayden, advisor to the board, recognized two individuals, respectively, for their outstanding contribution to the Africa Society and to U.S.-Africa relations: Dr. Leroy Gross, who has served as the Society’s treasurer for fifteen years, and Africare’s co-founder C.Payne Lucas. Receiving the award on behalf of her father, C. Payne’s daughter Hillary stated: “Many people had similar visions of a strong, productive and influential continent composed of independent nations.  None the least of these was Lenard Robinson and this, the Africa Society, was his vision. My Father salutes the Africa Society and in particular, Ambassador Andrew Young for his unwavering dedication to Africa and the Africa Society.”

Organized by the Africa Society of the National Summit on Africa, in partnership with the Embassy of the Republic of Ghana, this event marked the 25th Andrew Young Africa Lecture. The lecture series is named in honor of Ambassador Andrew Young, who served as the Society’s first board chair, and features distinguished speakers whose work has advanced the agenda of issues affecting the continent of Africa and U.S.-Africa relations.

For more information about this series and other programs from the Africa Society, please visit www.africasummit.org. 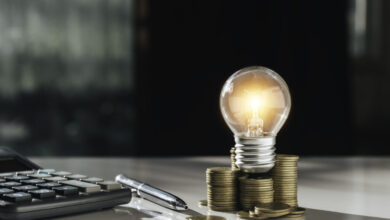