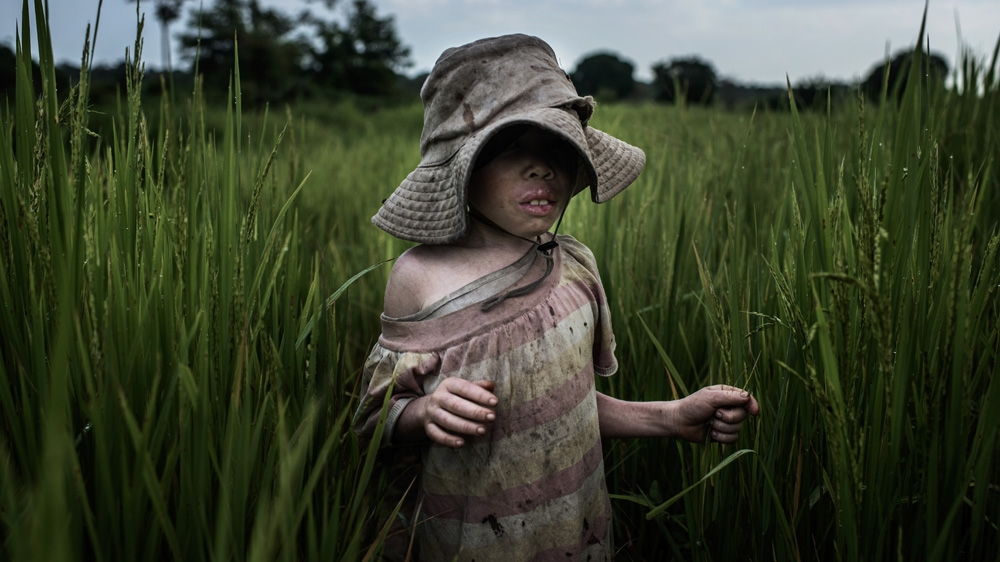 Kampala, Uganda – In Kampala, the city of seven hills, the traffic lanes are filled with 14-seat taxis and boda boda motorcycle taxis. The buzz of the city never slows no matter the time of night or day.

The boda boda bike takes a slow, bumpy journey through the green landscape of the countryside towards the village.

Mwanje was born here and the piece of land he owns has been in his family for generations. His father is buried just 10 metres away from the round, grass-roofed hut he inherited from his father.

He lives with his two wives, Lynda and Florence, and their eight children, who range in age from five months to 13 years. They grow sweet potato and cassava, and after a one-hour trek along small trails in the deep jungle, they buy fresh fish from the small boats that have been out on the lake before sunrise.

Theirs is a typical family in this part of Uganda but for one thing: Five of the seven children Mwanje had with Florence were born with albinism, a rare genetic condition where the body is unable, or is limited in its ability to produce melanin, the substance responsible for the colouring in skin, hair and eyes.

“My first reaction when my first son with albinism was born was just shock. I didn’t know what to think, but I immediately decided to love him. He was our son,” says Mwanje.

But in many families this is not the case. Some keep their children inside all the time, afraid of what neighbours might say, or because they lack knowledge about how to care for a child with albinism.

Often, the men choose to leave their wives as soon as the baby is born, arguing that it is not their child.

“There are rumours about me and my family. One is that I laughed at a person with albinism when I was young and he put a curse on me, that’s why I give birth to these kind of children,” says Florence.

The myths about albinism in East Africa are many, and they vary between countries, but the general perception of the skin condition remains the same.

It is said that a person with albinism holds great power in their body and that if you give a limb to a witchdoctor he will make you rich. It is also believed that they are in fact ghosts and not human.

In countries such as Tanzania and Malawi, countless people with albinism have been attacked, and had their arms or legs chopped off with machetes. Many are reported missing. They live in constant fear of falling victim to someone’s greed for gold.

WATCH: Investigating the trade in body parts of people with albinism

The situation is not as bad in Uganda, but the daily discrimination and lack of support from the government still makes life very hard.

In school many children with albinism are bullied and fellow classmates refuse to sit next to them. An inability to see well, which afflicts many with albinism, becomes a major handicap in the classroom. When combined with the usual challenges of getting a good education while attending the local village school, which lacks essential facilities such as books, pens and other supplies, this proves disheartening for the children and their parents.

“I wanted my children to get a good education so they could change their lives, so in the beginning I sent them to a school in the nearby town. But it’s quite a distance to travel there, and I was so worried that someone would try to kidnap or hurt them. I could never forgive myself if that happened, so I told them to attend the local school instead,” says Mwanje.

A couple of years ago, one such incident shocked the whole family.

Robert, the oldest child with albinism, and two of his friends were playing in the rice fields. The sun went down over the hill in the distance but they continued playing. Suddenly, they noticed a man hiding by the far end of the field. A silence descended, then the man rushed towards the children, and in panic, they split up and ran in different directions.

Robert ran one way, and his friends another. The mysterious man chased after him. But when all the children screamed loudly to attract attention, he eventually ran off.

Until this day, they have no idea who he was, or what he was doing there. But they all suspect that he wanted to kidnap one of the children with albinism.

Since then, Mwanje stays on the land most of the time to protect them.

The days pass in the same way for the family. They wake up as the rooster begins to crow in the morning. Everyone takes a cold bath, then the children line up and Mwanje or Florence apply the strongest sun protection cream they can buy.

They make sure that not a single drop falls into the sand at their feet. For this family in rural Uganda, the SPF cream is like a bottle of gold, a luxury they can’t afford to waste.

The children put on their old, worn-out hats and run barefoot, in a straight line down the path that leads to the large, green rice field, where they spend most of their day. They play, laugh, scream and cry.

Florence sits on the ground in her shinning red dress, singing a traditional song as she cuts the cassava. Fresh fish slowly turns crispy and brown over the fire beside her.

After dinner the family gathers, stretched out on the two tree matts Mwanje built. The food makes their bellies full, and their eyes heavy as a slow wind blows through the village. Here, surrounded by family and with their father keeping a protective watch over them, they feel safe.

The giant mango tree above them keeps the sun, their worst enemy, away from their fragile skin.

The post A father’s battle to protect his children with albinism appeared first on African Media Agency.