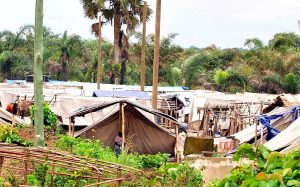 People go about their business at a camp of Ivorian refugees in the Ghanian town of Ampan, in 2011 (AFP Photo/Sia Kambou)

Egyeikrom (Ghana) (AFP) – Five years after the return of peace to Ivory Coast, 11,000 Ivorian refugees living in Ghana are still afraid to go home despite an upbeat economic climate in the world’s top cocoa producer.

While the international community deems it safe for those involved in a decade of trouble to return, Ange-Pelagie Baya told AFP: “We would prefer to die of hunger rather than go back.”

On Tuesday, a UN refugee agency-brokered meeting opens in Abidjan to prepare for the return of all the Ivorians who fled the bloody post-electoral violence that erupted in 2010-11.

Ivory Coast’s social cohesion minister Mariatou Kone has pledged that “no-one would be arrested on their return” and indicated a possible amnesty for those opposed at the time to current President Alassane Ouattara.

But of the 11,000 Ivorian refugees in Ghana, only four have officially returned since Kone visited Accra in May.

Ouattara won a second mandate in October on pledges of restoring longtime stability following the troubled 2010 elections which saw him compete against former strongman Laurent Gbagbo.

Gbagbo now is behind bars on trial in The Hague following the deaths of some 3,000 in post-election violence in 2010-2011.

In Ghana’s Central Region, the 2,200 refugees at the Egyeikrom camp, all of them Gbagbo supporters, are adamant they cannot return.

“We can’t go back as long as the (Ouattara) regime remains,” said Baya.

Baya doesn’t recognise Ouattara’s legitimacy as president, labelling him a “rebel” and a “foreigner”.

Yet she admits life as a refugee is harsh. “We don’t have anything here, just a bit of work in the fields during harvest time.”

Food distribution to the refugees was stopped in November and only three percent of the aid promised by donors to the UNHCR has been allocated since the start of the year.

“The donors would rather invest in the country, given that the situation in Ivory Coast is stabilising,” said the UNHCR spokesman in Ghana, Nii Ako Sowa.

With growth at eight percent last year, Ivory Coast, Ghana’s neighbour to the west, is no longer a priority for aid.

But for the groups representing the Ivorian diaspora, the budget cuts have been brutal and are seen as a way of forcing the poorest refugees to return home.

Leon-Emmanuel Monnet, a former member of Gbagbo’s Ivorian Popular Front (FPI) in exile in Accra, said the promises of reconciliation were a smokescreen and Kone’s visit “a publicity stunt”.

According to the UNHCR, more than two-thirds of the 300,000 Ivorians who fled in 2010 to Ghana, Guinea or Liberia are no longer registered.

Yet last year there were only 10 official returns from Ghana. Diaspora groups say many have gone to north Africa or Europe.

In reality, no-one really knows where they are. Besides some risk being considered as traitors if they return home.

“Refugees leave the country unofficially and this is a problem, since we don’t have any record of their return and don’t know how they reintegrate,” said Ghana Refugee Board (GRB) regional coordinator Charles Yorke.

“We’ve organised ‘go-and-see, come-and-tell’ missions. But when they come back and say things are going OK, they (the refugees) don’t believe them.”

Monnet for instance said the fact that Simone Gbagbo, the former president’s wife, was on trial in Abidjan, was proof they could not expect to go home and stay out of trouble.

“There is no process of reconciliation or justice — unless you’re talking about victors’ justice,” he said.

In Egyeikrom, near the town of Elmina, Jean-Louis Zougbo has lived in dire poverty in a UNHCR tent for five years.

In Ivory Coast he was a pastor from the FPI stronghold of Guiberoua some 300 kilometres (190 miles) northwest of Abidjan and headed a civilian militia.

He played a small part in the conflict but fears reprisal attacks if one day he has to go back to his home region. “I’m a nobody. If I disappear, if I go home and am killed, no-one will know.”

“Only one side is being targeted and everyone else is considered blameless, which isn’t right, isn’t just,” he said.