I majored in biology in college and thought I’d become a doctor. But I also wanted to travel. So as a way to do both, I spent years with international humanitarian organizations. The work was satisfying, but the social life was challenging: My colleagues would go back to their hotel at night — in part because they were almost all older than me, but also because they were fearful of the potentially unsafe, unfamiliar cities we were in. I didn’t want to be this far from home and not experience a place fully, so I often went out. And I discovered amazing things.

From a rooftop party at an advertising agency to road-tripping across the country for a DJ set, I was exposed to a side of Africa I’d never seen before. These were cosmopolitan movers and shakers, but distinctly African. In 2011, I met up with a photographer in Johannesburg; through her lens, I met entertainers, artists and other influencers. A year later, I connected with a sorority sister in Nairobi, Kenya, who was working on MTV’s African youth culture series Shuga. The show’s producer, fashion designer and filmmaker took me out to restaurants and nightclubs, and I had the time of my life.

That’s when the lightbulb went off. People weren’t exposed to this Africa, and I wanted to connect visitors to it — not just by talking about these amazing things, but by directing people to them.

I spent the next year or so developing Tastemakers Africa, a company to book epic experiences, with epic people, in every African city. In February 2014, I went to Lagos for Social Media Week to show off my early-stage mockup. My session was packed, which confirmed that I was really onto something. I was working for another NGO at the time but quit and joined MediKidz, a VC-backed healthcare startup, to learn more about building a company. The cofounder, Dr. Kim Chilman-Blair, was a sales genius. She was super-transparent with me about her funding process, and I saw a lot of her documents and pitch decks, and heard about the screwups. But the biggest thing I learned from Kim was to work harder than hard. Things need to get done in the NGO world, but there isn’t a sense of urgency; Kim always had a sense of urgency. 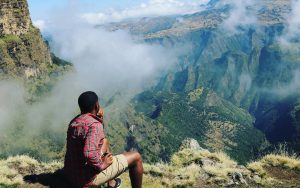 By that summer, I had fleshed out a prototype. As a proof of concept, we promoted a “Tastemakers Tour of Ghana” on my Facebook page, and it sold out in weeks. I still wasn’t ready to make it my full-time job, but then MediKidz was bought and I was laid off — so I slammed the gas on the startup. My boyfriend and I closed out our 401(k)s, and I entered an accelerator that gave us $20,000 and then raised another $100,000 from angel investors. I also won first place in a Lagos competition called She Leads Africa, which got me $10,000 and a mentoring network.

We launched our website in December 2014 and ended 2015 with more than $200,000 in experience and concierge bookings. Our app, Tstmkrs, launched in beta in December of last year, and we did $100,000 in Q1 bookings for 2016. We’re still figuring out who and where our audience is and what they’re willing to pay, but we’re learning and growing fast. In five years, we expect to be in at least 40 countries on the continent. We will be the brand, and our connections, support and infrastructure will make us important to many others who come here as well. We’ve already built partnerships with Uber, South African Airways and Radisson Blu (that one’s for a pan-African travel contest in Kenya, Nigeria and South Africa), and have gotten interest in an acquisition from a large hospitality company. But no matter what happens, I know we’ll have played a huge role in not just how people think about traveling in Africa, but what people think of Africa itself.

My Goal for Africa:How FIFA can do more for African football