Lawyers in California are denying Africans their own domain 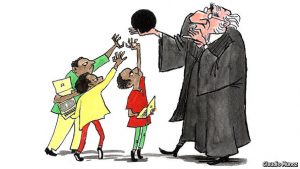 THE ruler-straight lines and strange squiggles of Africa’s borders are a reminder of how the continent was carved up by European powers around a conference table in Berlin at the end of the 19th century—with scant regard for the wishes of its inhabitants. (Several squiggles represent the shifting of a port or mountain into a different country.) Now a virtual version of this scramble for Africa is taking place in a court in California, over ownership of the continent’s internet address, or technically its “generic top-level domain” (gTLD).

The .africa name, which would grace the end of web and e-mail addresses, was meant to have joined existing ones such as .com about two years ago, when the web’s address book was opened up to thousands of new names. These included some flippant ones such as .cool or .rich as well as company brands such as .barclays. It would have joined regional names such as .asia or .eu that had been allocated a few years earlier. But a dispute over who should control the .africa address has dragged on for years and been further delayed by a recent ruling.

At issue was a decision by the Internet Corporation for Assigned Names and Numbers (ICANN), a non-profit organisation that manages the web’s address book, to give control of the name to ZA Central Registry (ZACR), a South African non-profit that was one of two applicants for the name. ZACR’s ace was not just that it had the support of almost three-quarters of African countries (it needed 60%) but that it had been chosen by the African Union to look after the address book for the continent.

The other applicant, DotConnectAfrica (DCA), a Mauritius-registered non-profit, was turned down because, among other things, it could not prove that it had enough support and because several African governments objected to it. Although it was clearly the weaker of the two applicants, DCA was thrown a legal lifeline when ICANN blundered, failing to halt its selection process when DCA appealed against the decision. Instead it went ahead and gave the rights to ZACR, opening the way to a further string of appeals and reconsiderations that have finally landed before a court in America. Judges there ordered ICANN not to hand out the name to anyone while the case drags tortuously on.

At stake is more than the money that would flow to whoever gets the right to sell .africa website addresses, but also an important principle over who should control regional names that are, in a sense, a virtual commons. African states have every right to feel aggrieved that, having decided who should control the web address of the continent, they are as powerless to enforce their wishes as they were in Berlin in 1884.

Has Eritrea's migration problem been exaggerated?

Foreign Minister Maas prior to his departure for Ethiopia and Tanzania