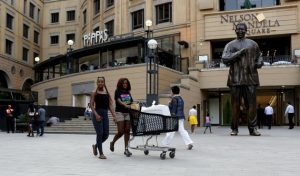 On Saturday June 4 2016 the United States embassy in Pretoria issued a warning to its citizens in South Africa that there was a heightened threat of terror attacks in the country’s upscale shopping malls in Johannesburg and Cape Town. The threat was tied to the jihadist group Islamic State’s appeal to its followers to undertake attacks on Western targets during the Islamic holy month of Ramadan. For the next several days, skittish South African shoppers strode through Sandton and Rosebank’s fancy shopping centres wondering if and how their own government would respond to the apparent threat.

Four days later, on June 8, the South African government did indeed respond. A joint announcement by the Department of International Relations and Cooperation (DIRCO) and the State Security Agency (SSA) stated: “The information provided as a basis for the latest terror alerts on South Africa has been found to be very sketchy. On closer examination, we have found the information to be dubious, unsubstantiated and provided by a ‘walk-in’ source based on questionable conclusions.”

Put simply, South Africa disagreed with the assessment of the US (as well as the United Kingdom and Australia) that a credible terror threat existed. This is not unusual. There are often disagreements both within and across intelligence agencies as to the seriousness of a potential threat.

The question of how “credible” the threat was (or is) is also vexing because for the public it is unanswerable. Without access to the various pieces of information that the intelligence agencies used to form their judgment about the severity of the threat, the public cannot engage in an informed debate. They cannot decide for themselves whether South African or American officials came to a more accurate conclusion about the gravity of the danger posed.

But the joint DIRCO-SSA statement did more than dismiss the credibility of the American warning. It also indicated that the American motive for issuing the warning was not necessarily to keep its citizens safe. In an accusation unmistakably directed at the US, the statement read:

. the South African government rejects attempts by foreign countries to influence, manipulate or control our country’s counter-terrorism work. We reject attempts to generate perceptions of government ineptitude, alarmist impressions and public hysteria on the basis of a questionable single source.

This is a serious allegation. It suggests that the US issued the terror advisory to undercut the South African government’s integrity and sow confusion within the country.

Unfortunately, the theme of this accusation is not new. In February 2016 African National Congress (ANC) Secretary-General Gwede Mantashe suggested that the US Young African Leadership Initiative was designed to foment regime change in South Africa.

In 2014, Deputy Minister of Defence and Military Veterans Kebby Maphatsoelabelled Public Protector Thuli Madonsela a CIA spy. He claimed she was attempting to undermine the ruling ANC and put a regime friendly to Washington in power. None of these accusations have been substantiated.

Thus the latest DIRCO-SSA statement accusing the US of attempting to destabilise South Africa must be seen in a broader context of mistrust and paranoia that continues to plague relations.

This mistrust matters. It could result in not just hurt feelings, but an actual breakdown in cooperation on key issues between South Africa and the US. And cooperation, especially in the realm of counter-terrorism, is vital.

The DIRCO-SSA statement confidently proclaims: “The South African government is fully capable of securing our country, protecting our people and taking care of the safety of foreign citizens on our soil.”

But this is not true. Global threats, such as terrorism, do not respect borders and therefore are difficult for any one state to combat. Effective counter-terrorism demands cooperation across states, and is impeded by petty conflicts between them. Casting wild allegations that the US warning is based on malevolent intent hinders rather than helps this cooperation.

While unproductive, South Africa’s pique might be somewhat understandable. That is if the US did not follow the correct channels to issue its warning, as the DIRCO-SSA statement suggests. The facts regarding what channels ought to be followed, and which ones actually were, are unclear. At the very least the South African government felt it was not consulted sufficiently before the US warning went public.

There is room here for growth in the relationship. Developing a clear understanding as to how to handle these types of terror alerts in the future would be a small but important trust-building step in a sometimes strained relationship.

But broader questions must also be addressed. A more measured statement found on the South African Presidency website affirms that, “South Africa and the United States continue to enjoy strong and cordial relations in various areas of cooperation including political, economic, social and security matters.” But friends don’t openly accuse friends of seeking to undermine them. If South Africa and the US want fruitful collaboration to continue, an end to public accusations and increased communication would be a good start.