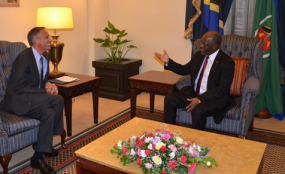 Photo: The Citizen
US Ambassador to Tanzania Mark Childress, who held talks with President John Magufuli at State House

The government of the United States has announced that it will pump 2.650 trillion/- (1.21 billion US dollars) to Tanzania, just two months after its foreign aid agency – Millennium Challenge Corporation (MCC), pulled 472 million USD (nearly 1tri/-) of funding in protest over alleged suppression of democratic rights.

“The USAID is expected to sign another pact with the government of Tanzania. The pact will see the aid agency commissioning 410m USD next year,” the ambassador said shortly after meeting President Magufuli.

According to the envoy, the new support is not related to the one suspended by MCC earlier this year. “Cancellation of MCC-2 funding has not changed our relations with Tanzania, and this includes development support,” Mr Childress noted.

The envoy assured President Magufuli that his government had a number of shared interests to team up with Tanzania, notably in the area of improving agriculture, education and health in the country.

The US independent foreign aid agency ceased its maiden support to Tanzania, citing the March 20 election re-run in the semiautonomous Island as ‘neither inclusive nor representative’. In the election, incumbent president Dr Ali Mohamed Shein emerged victorious with 91 per cent of total votes.

The planned 472m USD was an addition to 700m USD the US had given to the Tanzania government in 2008 to improve transport, energy and water. Mr Childress, who was in full support of the MCC decision, immediately noted that Tanzania was the US’s largest bilateral development partner.

“We will continue our work together to improve health and education, promote economic growth, and advance security.”

Before the support was brought to annihilation, the government has earmarked to speed up clean energy supply and policy reforms that would change the state-run utility, Tanzania Electric Supply Company (TANESCO).

However, in his remarks to the US ambassador, President Magufuli said his government will continue improving bilateral relations with Washington, adding that the funds were vital for economic development.

“The ambassador has assured us that the US will offer development support to Tanzania amounting to 800m USD. Moreover, another agreement amounting to 410 USD will be signed anytime from tomorrow,” he said.

He added that the decision to suspend MCC support has not affected the country’s friendship with the US. “Tanzania and the US will continue being friends and now they are pumping more money to facilitate Hapa Kazi Tu efforts,” the president observed.

The two also discussed on the progress of projects implemented by Belgium in Kigoma, vowing to strengthen trade and investment relations.