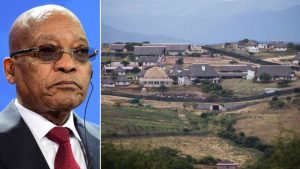 The Nkandla residence has become a political headache for President Zuma

South Africa’s treasury has recommended President Jacob Zuma pay back $509,000 (£385,000) to the government for upgrades made to his private home.

This comes after the country’s highest court ruled earlier this year that Mr Zuma repay some of the $23m of public funds spent on his house in 2009.

Mr Zuma must now repay the money – about 3% of the total spent – within 45 days.

An anti-corruption body, known as the public protector, ruled in 2014 that Mr Zuma had “unduly benefited” from the non-security renovations to his rural home in Nkandla in South Africa‘s KwaZulu-Natal province.

In March, the Constitutional Court then ruled that he had violated the constitution when he failed to repay some of the money.

It gave the treasury two months to come up with a figure for Mr Zuma to repay.

The treasury says it hired two independent quantity surveyors to conduct separate investigations to come up with the figure.

The main opposition Democratic Alliance (DA), one of the parties which brought the case, welcomed the treasury’s report but said it had hoped the figure would be higher.

“This sends out a clear message to those involved in corruption, especially those in the ANC, that you will be held accountable for your actions, even if you are the president,” the AFP news agency quotes DA spokesman Mabine Seabe as saying.

What has been a long and drawn out fight between President Zuma and opposition parties seems to be coming to an end, reports the BBC’s Pumza Fihlani in Johannesburg.

The Nkandla scandal has been a hotly debated subject in parliament for almost three years and has damaged the president’s reputation, she says.

In April, President Zuma apologised for the controversy and said he would abide by the Constitutional Court’s ruling.

A few days later he survived an impeachment vote in parliament, showing his opponents that he is a true political survivor, our correspondent says.

What Mr Zuma’s money will go towards