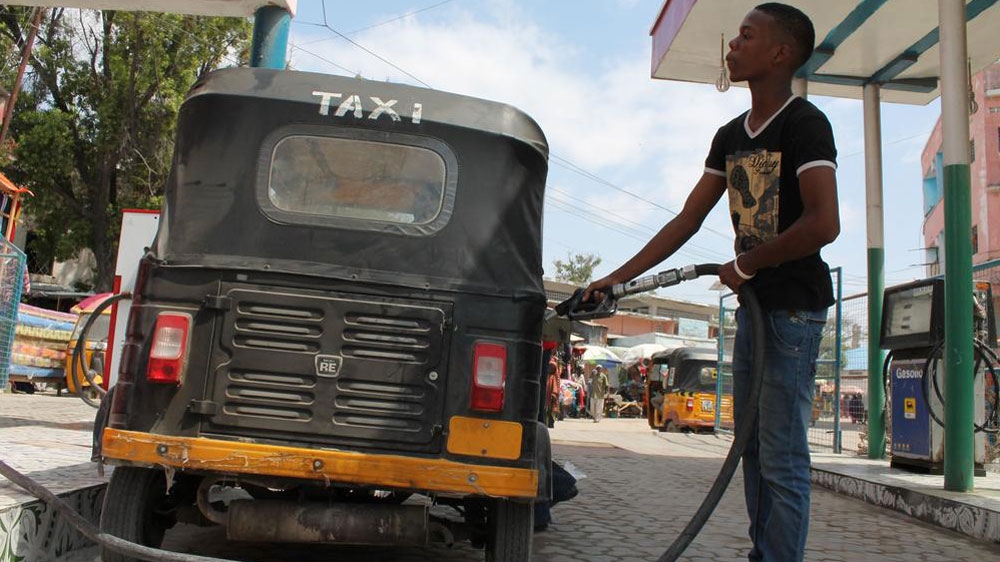 Mogadishu, Somalia – Drivers in the morning rush hour in Mogadishu jostle for space to fill their tanks in one of the newly opened petrol stations in the city. An attendant shouts at the drivers, directing them: “Come forward a bit, a bit more. Stop.” These scenes are new to the city and its residents.

The filling station is in the K4 area in the heart of the city and it has witnessed a big increase in the number of vehicles passing through its gates since it reduced its prices.

Drivers for a long time complained of high prices at the pumps and avoided filling up as much as possible. Now they have received a respite.

Prices have dropped in line with the slump in the price of oil in the global market. Since December, consumers say, the price for a litre of petrol in the Somali capital has dropped by at least 30 percent.

“The price has changed. I used to pay $5 for five litres but now I pay $3.50. That is very good news for us drivers as it means we save money that we can use for other things. I hope the price of oil continues to fall,” Zakariye Abdiqadir, a driver at Somoil station told Al Jazeera, as he waited for his turn to fill up.

“I never used to fill my tank because it was very expensive. Now coming here is not too bad on our wallets,” Abdiqadir added.

At least half a dozen petrol stations have opened in the city, which is recovering from more than two decades of civil war, that ended three years ago.

Following the collapse of the country’s central government under long-term ruler Siad Barre, in 1991 the energy sector was completely destroyed and drivers depended on vendors who sold expensive petrol from jerry cans by the side of the road. These vendors are slowly disappearing from the streets of the seaside capital and petrol stations are taking their place.

But it is not just drivers benefiting from the global collapse in oil prices. Petrol station owners have witnessed a rise in sales, not just of petrol but also other goods.

“A year ago when this station opened a litre of petrol was $1.20. Now it is $0.70,” said Abdihafid Ali, a Somoil petrol station manager. “Our customer numbers have increased as the prices decreased. More drivers are having their cars washed here or have the oil changed.”

As employees washed cars behind him, The station manager told Al Jazeera that: “Sales of everything have gone up because drivers have more money to spend.”

Price of oil determines most things on the markets of Mogadishu, something that is not lost on the city’s drivers.

“Even the water we drink in Mogadishu is affected by the price of oil. The water we drink was purified using electricity which came from diesel generators,” Abdiqadir said, holding a one litre bottle of chilled water.

No changes for public transport rates

But the petrol price drop and the good times have not reached everyone in this city of more than one million people.

Most people use public service vehicles to go about their daily life. Yet, fares have remained the same. In the Wadajir district of the city, dozens of commuters rush to take the quickly-filling minibuses at the Medina bus station.

The commuters are not happy at what they see as a rip-off by drivers and bus owners. “I’m paying the same fare as I used to pay before the change in the petrol price,” said Abdisalam Sheikh, a university student as he boarded the bus.

“When you ask them why they are not changing the price, they either say the price will change soon or they will say it is not their vehicle, they are just employees,” Sheikh told Al Jazeera.

“There is not much we can do. We cannot walk to university or to work. So we just pay and hope they lower their fares one day,” he added.

Adil Abdiqadir Hassan was rushing to get to work and sat a few seats away from Sheikh on the minibus. Hassan said he thinks the fares need to reflect the change in the price of petrol.

“Before, when the price of petrol went up they were quick to raise our fares, but when it goes down they are not keen on lowering the fares. To them it is all about maximising their profits,” Hassan said.

But owners of transport vehicles in the city say they have good reason not to reduce the fares.

One minibus driver, Abdirahim Ma’alin, explained that “before when the price of petrol was high there were not many buses. But now there are too many buses which means fewer commuters to take so there is less profit and that’s why the price is the same.”

But as oil-producing countries feel the pinch from the drop in oil prices, in Somalia people for the most part are enjoying the benefits.

“We paid a lot of money for petrol for a very long time. I hope the price continues to fall as the low price of oil is good for our lives and development of our country,” Abdiqadir, the driver at the petrol station, said.

READ MORE: The expensive luxury of electricity in Somalia

The post Somalia rides the ups and downs of a global oil crisis appeared first on African Media Agency.