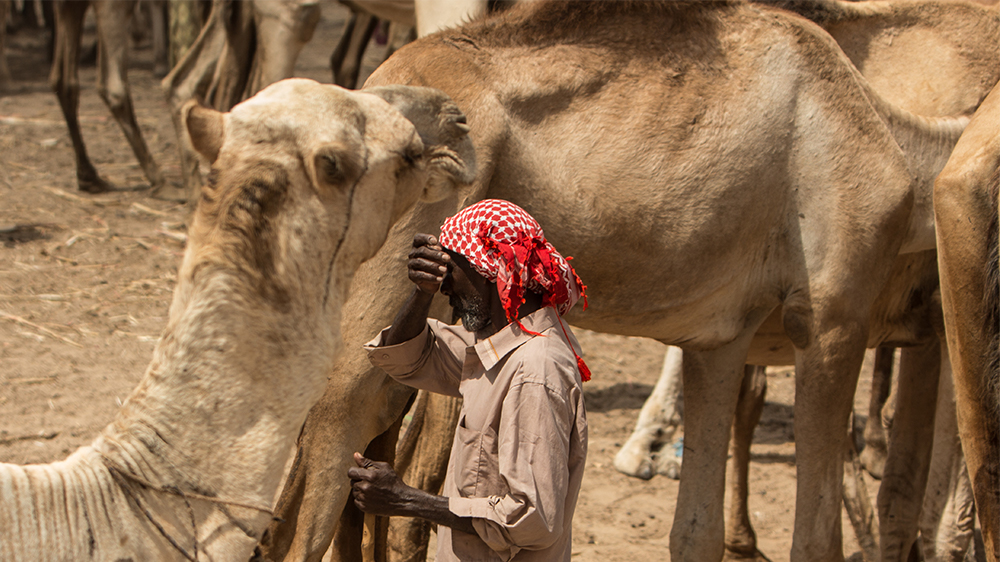 Elasha Biyaha, Somalia – It is Wednesday morning in a tea shop made of sticks and tarpaulin next to an expansive open air livestock market in the pop-up town of Elasha Biyaha, 16km southwest of the Somali capital, Mogadishu.

A group of middle-aged men sit on plastic and wooden chairs, ears glued to a radio broadcasting the 9am news bulletin. The men are camel traders, and they are following the latest news from the wars in Yemen, Syria and Iraq.

The conflicts in these faraway countries have affected their trade and livelihoods badly. Business is slow and the traders say they barely make any money.

“Business was very good when our animals used to be taken abroad,” Musa Hassan told Al Jazeera, surrounded by camels chewing the cud under the morning sun. He has been in the business for more than 20 years.

The Horn of Africa country used to export millions of camels to these Arab countries each year but when the conflicts started, exports slowed. Then they came to a complete halt as the war in Yemen made it too risky to use the Yemeni sea to export the animals.

“The profit margins are better when the animals are taken abroad. People in those countries have more money and can afford to pay more for our camels,” Hassan explained.

In 2014, Somalia exported a record five million livestock to countries in the Gulf, the highest number of live animals exported from the east African country in more than two decades, according to the UN’s Food and Agriculture Organisation (FAO). That included 77,000 camels. This year, only 2,000 camels have left Mogadishu port, the largest port in the country.

Of the world’s estimated 14 million camels, Somalia, a country of some 10 million people, has more than seven million – the highest number in the world.

Livestock is the backbone of the Somali economy with more than 65 percent of the population engaged in some way in the industry, according to the FAO. Furthermore, World Bank figures indicate that the export of livestock and their products accounts for 80 percent of the country’s foreign exchange.

By the side of the market is a small stall selling cold drinks to traders and hawkers. Amina Noor, a mother of five, has worked at the market for five years and has seen the change in the market’s fortunes first-hand.

“Everything is slow. More animals used to be brought to the market. Traders used to have more money to spend. Now less of them come to the market and the animals at the market used to be a lot more than you see today,” said Noor, pointing at the herds of camels.

The price of meat

With markets in the Middle East out of reach, traders are trying their luck at the local meat markets in Mogadishu. Thirty minutes’ drive from the livestock market in the Bulo Hubey area of the Somali capital is one such place. Customers flock here early in the morning to get the freshest cut before restaurants put in the day’s order.

But Abdiweli Mursal, a meat trader at the market, said they were not doing any better than the traders at the livestock market.

“Before, the market was better,” Mursal said, referring to the time exports were shipped almost daily out of Somalia. The money exporters made used to trickle down to everyone in the city, according to Noor.

“People had more money and they could afford to buy meat. The price of meat is still the same. Our business is connected to the general economy in the country which is not very good,” Mursal added.

The Somali Chamber of Commerce and Industry agrees, and says that the economic consequences of the conflicts in Middle Eastern countries have already been felt in Somalia.

“Ships carrying camels were turned back from Yemen because of the ongoing conflict there. The stop in export has affected people badly. Hundreds of jobs have been lost and many more will be lost if exports don’t start again. Somalia is suffering because of wars elsewhere,” Abdi Abshir Dorre, director general of the Somali Chamber of Commerce and Industry, told Al Jazeera.

According to Dorre, the current plight of traders in the livestock industry is worse than that witnessed during the 2011 and 1993 drought that hit the country.

Back at the livestock market, traders say they feel powerless and talk of their livelihoods being caught up in a fight they have nothing to do with.

“I’m a trader. I sell camels and that is the only thing I know anything about. I don’t know how or why the conflict started but I’m praying it ends so that our business goes back to its normal way,” Hassan, the camel trader, said.