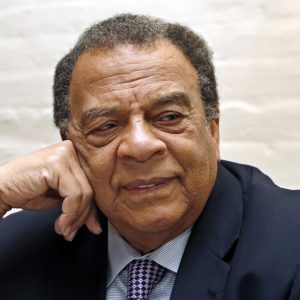 WASHINGTON, D.C., June 23, 2016—The Africa Society of the National Summit on Africa, in partnership with the Embassy of the Republic of Ghana, will host Ambassador Andrew Young, as the special guest speaker for the first talk of the 2016 Andrew Young Africa Lecture Series, which is named in his honor. This program will take place on:

Embassy of the Republic of Ghana

In his lecture, titled Africa: Yesterday, Today and Tomorrow—A Perspective, Ambassador Young will take an in-depth look at how the continent has emerged as a center of world markets, trade and investment. While recognizing its great economic potential, he will delve into the increasing necessity to build a stable political and economic relationship with the United States. Among the issues under discussion will be highlighting African nations’ needs and priorities and unlocking opportunities in the face of challenges to fostering the continent’s economic development.

A civil rights activist, former public servant, and legend to many, Ambassador Andrew Young continues, at 84, to demonstrate his unflagging passion and hope for Africa while working to raise the standard of living of its people, from fighting for equality and economic justice in South Africa to advocating for political and financial self-sufficiency in Ghana, Nigeria, Kenya, Zambia, and other countries.

“While you look at everything that goes wrong, I see wonderful people in this country who do wonderful things,” Ambassador Young said of South Africa during a recent tribute at the Nelson Mandela Centre of Memory on March 29, 2016, in Johannesburg.

Mr. Malcolmn D. Pryor Sr., a member of the board of The Africa Society will introduce Ambassador Andrew Young.

The event and its reception preceding will be attended by representatives from governments, civil society, civil rights activists, members of the African Diplomatic Corps, the diaspora, stakeholders, and those interested in U.S.-Africa relations and African affairs.

The June 23rd talk is part of the Ambassador Andrew Young Africa Lecture Series, which features distinguished speakers whose work has advanced the agenda of issues affecting the continent of Africa and U.S. – Africa relations. The series was named in honor of Ambassador Andrew Young, the former chairman of The Africa Society Board.