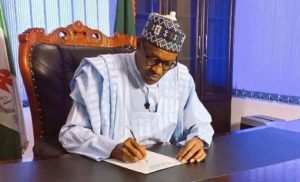 LAGOS, Nigeria –  Nigeria says it has seized more than $10.3 billion in looted cash and assets in the past year under President Muhammadu Buhari’s anti-corruption campaign.

Information Minister Lai Mohammed says the government also expects repatriation of some $330 million stolen from the public treasury and stashed in banks abroad. Most is in Switzerland.

Mohammed’s statement Saturday did not include names of accused officials, though the government had promised to publish them.

He said the funds include $583.5 million recovered in cash and $9.7 billion in cash and assets under interim forfeiture including sea-going vessels, buildings and land.

Hundreds of people have been arrested, and the many ongoing trials include that of a former national security adviser accused of diverting $2.1 billion meant to fight the Boko Haram Islamic insurgency.

Gambian wins £4m and goes back on shift

UNSMIL WELCOMES POSITIVE RESPONSES BY LIBYAN PARTIES TO THE CALLS FOR A HUMANITARIAN PAUSE, HOPES FOR AN IMMEDIATE CESSATION OF THE FIGHTING