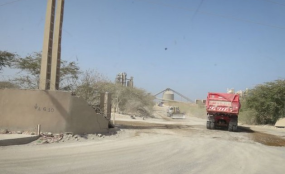 The 24 kilometre Itori-Ibese concrete road, which construction was flagged off at the weekend, in Ogun, would be constructed by AG-Dangote Construction Limited, its joint venture company, with Andrade Gutierrez (AG), the leading construction company in Brazil, and would be the longest stretch of concrete road when completed.

Speaking at the event, the president/chief executive of Dangote Industries Limited, Aliko Dangote, said the decision to introduce cement concrete roads in Nigeria, was in line with what obtains in other parts of the world.

He noted that concrete had always made the most sense in the long run as no other paving material approaches concrete’s strength and durability in standing up to heavy usage and truck traffic, saying that one of the major infrastructural challenges is the lack of good quality roads.

“Obviously, this calls for a review of our existing method of building roads in Nigeria. Roads play an important role in the social and economic development of any nation,” he said.

According to Dangote, some state governments were already beginning to take more interest in concrete roads, announcing, “In another CSR initiative, we are reconstructing the Ijora-Apapa Wharf Road in Lagos State, using cement concrete and within the next 18 months, we expect to complete the project and bring succor to Lagosians.

“We have also recently been finally awarded the contract to reconstruct the 42 km Obajana-Kabba Road in Kogi State, in concrete. The estimated cost of the project is N11.5 billion but the federal government has granted us a tax waiver to enable us to recoup part of the estimated cost at N5.6 billion in tax credits and the balance will be our donation as part of our CSR,” he added.