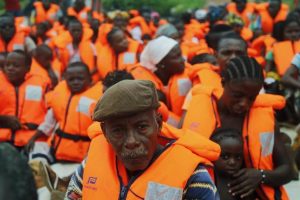 Ivorian refugees sit in a UNHCR ferry as they leave Liberia crossing the Cavally river, a natural border with Liberia, near Prolo, Ivory Coast, May 20, 2016. REUTERS/Luc Gnago

FETE, Ivory Coast, June 9 (Reuters) – Stepping off a river ferry onto the soil of his native Ivory Coast for the first time since he fled civil war five years ago, Innocent Weley Nonmah left behind the harsh life of a refugee and an Ebola epidemic that prolonged his family’s exile.

But coming home he had a new worry: that his five hectares of farmland might have been occupied by members of a rival ethnic group.

“I need to be close to my fields,” said the 33-year-old cocoa and palm oil farmer, who returned last month from exile in Liberia with his pregnant wife and four children.

“I need to go and see with my own eyes … that there is something there for me,” he said, after a gruelling journey aboard a battered minibus over dirt tracks winding through Ivorian forests.

Ethnically charged disputes over land in Ivory Coast’s fertile west played a central role in more than a decade of turmoil in the world’s leading cocoa producer. When a contested 2010 presidential election erupted into a five-month civil war, those tensions fuelled some of the conflict’s worst bloodshed.

A post-war economic recovery has made Ivory Coast the darling of investors in Africa. But as refugees from the war trickle back – around 16,000 have returned since December, leaving 22,000 still in Liberia – unresolved disputes over land could reignite violence.

Nonmah and his family had carried their few possessions bundled in cloth as they travelled in the bus with “Love and Trust” emblazoned on the rear doors, rattling past cocoa groves and palm oil plantations along Ivory Coast’s western border.

They were dropped off in the closest major town to their home village of Fete. The U.N. refugee agency charged with bringing Ivorian refugees home still deems Fete too dangerous to return to, so Nonmah has not been able to check on his farmland.

But he said there was no sign of the community he had left behind in surrounding areas. In angry comments pointing to the tensions still simmering in Ivory Coast, he said: “There are people there, but not us. They are foreigners.”

Nonmah is a member of the Krou ethnic group, many of whom fled the fighting in 2011 when forces loyal to presidential election winner Alassane Ouattara fought to install him after his rival, Laurent Gbagbo, refused to cede power. The Krou were among the groups that had supported Gbagbo.

But the roots of the conflict run much deeper, and include disputes over who is “Ivorian” in a land full of migrant farmers from neighbouring Burkina Faso and Mali. 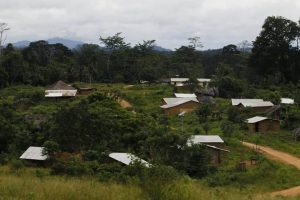 Houses abandoned during fighting in 2011 are seen in the village of Fete, Ivory Coast May 21, 2016. REUTERS/Luc Gnago

Ivory Coast’s first president after achieving independence in 1960 – Felix Houphouet-Boigny, who ruled for three decades – flung open the doors to migrants from across West Africa, seeking labour to develop the nation through agriculture.

To encourage people to work plantations, he declared that the land belonged to whomever grew cash crops on it.

The plan worked. Today, in addition to its cocoa dominance, Ivory Coast is Africa’s leading natural rubber exporter, a major producer of palm oil and a regional player in the cotton sector. Last year it became the world’s top producer of cashew nuts.

But the economic success came at the cost of a simmering conflict that pits ethnic groups who feel dispossessed of their native lands against migrant farmers.

Immigrants make up nearly a quarter of Ivory Coast’s population of 23 million inhabitants, according to a 2014 census. In many areas of the fertile west, ethnic groups like the Guere, Bete and Krou – who settled there centuries ago – are outnumbered by immigrants and people who have moved from other parts of Ivory Coast.

The main newcomers to the west are President Ouattara’s Dioula group, which includes people from Burkina Faso, Mali and Guinea as well as from northern Ivory Coast, most who have arrived since the 1970s. During the civil war they were targeted by militias allied to ex-president Gbagbo, who is facing trial in The Hague for alleged crimes against humanity.

Ethnic violence has occasionally resurfaced since the war. In 2014, two raids by unidentified fighters killed nearly two dozen people in Fete, including prominent members of the immigrant community.

The government blamed those attacks on Liberian mercenaries who had fought for Gbagbo. But Fete’s village chief Roger Loma Kapet said people from the Dioula community – “foreigners”, he called them – used those attacks as pretext to burn the nearby Krou village of Djimane to the ground three days later.

“It was revenge,” said Djimane’s village chief Jacques Nemlin Douai, who returned from Liberia last month to discover part of his land occupied by a migrant neighbour.

Fengolo is a sprawling village in western Ivory Coast, bisected by a highway and surrounded by cocoa trees. Dieka Issa Ouattara, a leader of the local Dioula community there, still shudders to think of the civil war years.

“They killed people. They raped women. Their goal was to chase the foreigners off land they’d already sold and to take it back,” he said of the pro-Gbagbo militias.

To avert further violence, Ivorian lawmakers are trying to resolve the underlying land tensions once and for all. In 2013, they voted to require landholders to officially register property ownership claims within 10 years, or else the land would revert to the state.

“There is a lot of bad faith in the management of land. It’s often hard to determine the true nature of land rights,” said Constant Zirignon Deble, director of rural lands at the Ministry of Agriculture. “That is a source of conflict.”

But, three years on, the process is struggling in a country where land sales have long been subject to traditional customs, contracts are often scribbled on a scrap of paper, if anywhere, and property boundaries are rarely formalised.

The government estimates that to cover all of Ivory Coast’s land holdings, it will need to issue around a half a million titles. Only 2,500 have thus far been printed.

The cost and bureaucracy of registering land is daunting for many farmers. It requires those applying for titles to prove there are no counter-claims to their property, which Fengolo’s Ouattara fears could open the floodgates to countless new disputes and lead to migrants being stripped of their rights.

“I didn’t budge from my land during the crisis,” he said. “If the state comes to remove us from our land after these 10 years, we won’t move. They’ll have to kill us all.”

Sylla Yakouba, a 62-year-old retired government employee, spent several thousand dollars to register his 25 hectares in a process that required two separate land surveys, two rounds of affidavits from his neighbours and repeated trips to the commercial capital Abidjan.

But he said the process is impossible for most poor farmers, who are often faced with the choice between buying fertiliser or paying a child’s school fees. “Hardly anyone has done their papers,” he said.

The government has pledged to streamline the process and make it more affordable, and Deble said the law should be seen as a source of security for land claims, not a threat.

“We are very aware that this is not an easy operation,” he told Reuters. “But if we don’t do something today, it will be even worse tomorrow.”