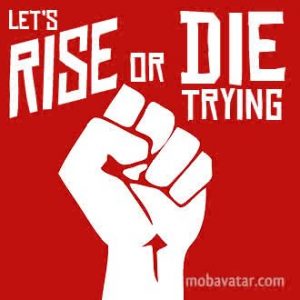 In recent times, in the build up to the first anniversary of the PMB regime and the Change Government in particular, as well as in the build up to the twenty-third anniversary of the annulment of the June 12 1993 presidential elections in general; and against the backdrop of the resurgence of separatist agitations in the South East [Biafra] and in the South-South [Niger Delta militancy]; there have been growing recalibrated strident calls among leading members and fractions of the Nigeria ruling class for what they call ‘Restructuring’ of Nigeria.

For the avoidance of doubt, the call to restructure Nigeria is neither the exclusive preserve of the ruling class in their intra-class factional struggles, nor is it a new call. It is a call, a demand, a bargaining weapon of choice, in their now covert, now overt intra-class skirmishes.

The call to restructure Nigeria, it must be affirmed has also periodically found resonance among ordinary Nigerian citizens and gained traction particularly in times of deepening economic and political crisis. The more debilitating the economic crisis, the greater the instability in the polity, the more strident the calls for restructuring get.

Ruling class factions and fractions who lose out or are losing out in the jostle for control of and access to state power at central and sub national levels proceed to mobilise existing grievances along the lines of existing cleavages, as well as co-opt existing and incipient resistance struggles of impoverished and oppressed citizens against declining living conditions and intensifying economic hardships.

It is important to note and underscore the above points because these form the basis for the seeming inability of the ruling class to resolve the national question, as well as the seeming protracted nature of the agitations for restructuring and the continuing resurgence of separatist agitations that accompany these.

So what are the issues cohering around the ‘restructuring’ debate? These will include issues of so-called ‘True’ Federalism, Fiscal Federalism, Local Government Autonomy, State and local government creations, among others.

Put together all these can be summarised around appropriate political structure for the Nigeria Federation and appropriate fiscal relationship between and among the federating units.

And whereas there may be and there are indeed some very basic and common irreducible characteristics and features of a deferral polity, there is no such thing and there can be no such thing as a so-called ‘true’ federalism.

In addition to these there is also the incongruous three way revenue sharing/allocation mechanism among three levels of administration – the Federal, The State, and The Local Government – that converts the federation into a three tier fiscal federation super imposed on the basic structure of a two tier political federation.

These anomalies it must be emphasised grew out of our own particular history, and especially the historical context of military usurpation of power and consequent military rule.

Contrast these to the situation across many federations as well as with Nigeria’s Federal experiment in the first republic before the military intervention and the civil war.

Nigeria at the inception of the post-colonial period can be said to be largely a creation of the federating regions; this being a feature that it shares with most federations.

Nigeria’s independence and its constitution was negotiated by the regions which were the federating units.

Each region had their own constitution alongside the Federal constitution – another feature Nigeria shared with most other federations.

The powers of the federation were distributed in such a way as to assure the existence of a strong centre, as well as strong federating units with autonomous powers.

The creation, nature, character, role and functions of administrative and political units below the federating components, and within their boundaries was the exclusive preserve of the federating unit; with a very critical proviso however that these processes were going to be guided by rule of law, and that the procedure for ensuring these was enshrined in their respective constitutions. Again these were features that Nigeria shared with other federations.

And significantly the bulk of revenue collection powers other than customs and excise duties and such other revenue that because of their character were central to national sovereignty were collected directly by the regions, the federating units, from where the processes and activities leading to the generation of the revenue were emanating or based.

Thus it was that the revenue allocation among the federating units [the regions] and the federating centre [the federal government] was as follows: 50% of revenue generated and collected was retained by the Regions [or federating units]; 30% was paid into a Common Distributable Pool] from which every region could be supported and that was also utilised to ensure that no region fell behind development wise in relation to other regions; and 20% that was allocated to the federal centre to carry out is activities.

As we can see from the foregoing although every region had local administrative units the largest of which were the provinces, they were not included in the allocation formula. Every region took care of all its own expenses, including its political administrative units primarily from its retained 50% of collected revenue; as well as from its share from the ‘Common Distributable Pool’.

It is thus true that a major contributory factor to why we are where we are today is the fact that states, which are supposed to be the federating units have become too small and too stripped of the powers and the capacity to generate and collect revenue to be fiscally autonomous of the federal government at the centre.

Of course compounding this basic structural defect have been the congenital greed, the inherent incompetence and ineptitude, and the crass opportunism of the ruling class.

These has helped to create an enabling environment unbridled treasury looting in the race for competitive primitive accumulation by the ruling elites, with the result that public wealth and public resources have been plundered and the state rendered incapable of provisioning the basic needs of citizens.

The point being made is that although a defective structure cripples the ability and capacity of the state to be utilised as the instrument of radical social transformation, of the type that enables equitable access to resources, opportunities and wealth of the society; thus enabling an all-round and more socially just human and societal development; nevertheless the structure of the polity alone without a corresponding socio-economic structure that is equitable and justice will not address the problem of deepening and intensifying inequality and widening gap between rich and poor.

This is why although the US is a federation; it is also one of the most unequal societies in the world.

So what does this tell us? And where does this lead us? First restructuring, as well as the calls and agitations for it, is not a neutral concept, free of class interests. The ruling class factions calling for it, organising and mobilising around it, and attempting to co-opt existing agitations and grievances in support of it, are doing so sorely out of their own selfish class and or factional class interests; and basically as a platform to renegotiate their access to and control of state power in Nigeria.

It is therefore important that ordinary Nigerians, ordinary citizens, the impoverished working and toiling classes, along with the marginalised and oppressed peoples should also consciously enter the fray of the agitations and mobilisations in our own collective class interests as well.

What does this mean? It means measures and mechanisms, as well as an economic system and process that ensures equitable access to opportunities, and to resources; and one that ensures a more equitable redistribution of wealth, and that places safeguards against the cornering of society’s wealth by a few.

It means that at the very minimum, at the base of an effective and efficiently functioning federal structure must be a Welfare and Developmental state. A state that superintends over and facilitates the creation of an enabling environment that ensures that no citizen is too poor to afford the basic necessities of life – Food, shelter, good health and work. It means that this must be a state that also ensures that the basic infrastructure necessary to facility the enjoyment of the basic necessities of life are not only available, but are also accessible and affordable to even the least resourced citizens.

This is the socio-economic restructuring that we must demand and fight for as a basis for the political and fiscal restructuring.

It must be a two tier federation, with a federal constitution that appropriately delineates the roles and functions of the centre vis-à-vis the federating units.

In addition to the Federal Constitution, each federating unit [each of the six to nine federating geo-political zones] should also have their own constitutions which shall guide their own internal operations and regulate the relationship between the federating unit and the various levels of sub units of administration into which each may deem fit to create and constitute within its own boundaries.

Enshrined in the federal and ‘Zonal’ constitutions must be the agreed Revenue Allocation Formula between the Federal centre and the federating units as well as the procedures for amending this.

Equally it must be enshrined in the various constitutions of the federating units the agrred Revenue Sharing Formula between the Federating unit and the major sub units and sub levels of administration created by it, as well as the procedures for amending same.

It is from this common distributable pool that the welfare state across the federation should be funded. It is also from this pool that affirmative action programs to reduce development gaps between and among regions will be funded among others.

It amounts to simply playing to the gallery and insincerity to make the demand for restructuring in a very ambiguous manner.

No trade union worth its salt makes a specious demand for increase in wages or improved conditions of working without backing it up with concrete figures. And certainly no employer of labour will take seriously any trade union which makes such ambiguous demand without a concrete proposal.

Slogans cannot be negotiated, only concrete demands can.

And finally let me also join in affirming that as imperfect and even possibly contradictory some of the recommendations of the 2014 National Conference may be; the report of that conference represents not just a resource base for renegotiating the structure of Nigeria, it is in fact a very important starting point given its recentcy [pardon my creation of this new word].

*Jaye Gaskia is National Co-ordinator of Protest To Power Movement [P2PM], and Co-Convener of Say No Campaign [SNC]