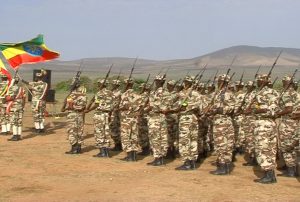 A U.S. financed para-military force known as the Liyu police are terrorizing the civilian population in the eastern Ethiopian Somali region without impunity. Three weeks ago, out of the gaze of the international media, the Liyu (Amharic for “First”) police slaughtered more than 40 villagers including women and children in Jama Dubad, a remote hamlet in the eastern Ethiopian Somali region, according to Somali news websites. The Liyu police were retaliating, after a group of armed men attacked customs police for confiscating a vehicle transporting Khat(a leafy  plant, which acts as stimulant when chewed), belonging to a local dealer, for failing to pay taxes.
Since 2008, the Liyu police had committed similar massacres in the villages near Ethiopia’s porous border with Somalia and the unrecognizedRepublic of Somaliland: For instance, in June 2015,the Liyu police attacked local ethnic Somali livestock herders, on Ethiopia’s  border with central Somalia, which left 50 people dead. Video footage showing the aftermath of the gruesome killings shot on a cell phone went viral on Somali news websites:  In the video, groups of the thuggish Liyu police with camouflage uniforms were desecrating dozens of dead bodies, including young children, who were shot in the head. Their atrocities constitute crimes against humanity and war crimes.
The Liyu police have no formal training or discipline, yet it has the full support of the Tigrean people’s liberation front (TPLF) government in Addis Ababa. The TPLF initially set up the Liyu police as a counter insurgency force against the Ogaden national Liberation Front (ONLF), a group fighting for self determination for the Somali region. The un-elected governor of the Somali region, Abdi Omar also known as “Iley”, commands and controls the Liyu police. Most of the units of the Liyu police are recruited from his own clan.
Since the Liyu police was instituted, Mr. Iley has been using that force to bully and intimidate the civilian Somali population in the region. The Liyu police’s “scorched-earth” tactics include: “Mass killing, kidnappings, rape, looting livestock, destroying wells, and razing villages to the ground,” according to the Human Rights Watch.
The victims of the Jama Dubad terror have kinship with the 4 million Somaliland people, especially those in the town of Burao.The relatives of the victims and people throughout Somaliland felt sorrow and grieve because  of the horrific crimes and deaths caused by the Liyu police.
Unfortunately, the massive human rights abuses are not only unique in the Somali region. For example, this past November, the Ethiopia security forces mowed down more than 400 people, after the Oromo ethnic group protested over the government’s plan to expand the zoning of the Addis Ababa, Ethiopia’s capital. “Ethiopian security forces have fired on and killed hundreds of students, farmers, and other peaceful protesters with blatant disregard for human life,” said Leslie Lefkow, Human Rights Watch Deputy Africa Director.
The leaders of the United States, Britain and EU, who provide billions of aid to Ethiopia, should publicly condemn the Ethiopian government’s security forces when they are abusing their own people and culture of impunity that prevails there. The west should use all means necessary including aid cuts, travel restriction, and asset freezes to punish countries that perpetrate crimes against humanity not only in Ethiopia but throughout Africa.
The west and the United Nations should  hold accountable, the belligerent, thuggish commander of the Liyu police, Mr. Iley, the Al Capone of Jigjiga, the regions capital, and his enablers in the Ethiopian army, who are behind these heinous acts.
More importantly, The United State should also argue the Ethiopian government to invite a UN rapporteur and human rights experts to investigate the atrocities in Jama Dubad village and the Oromo region, and to let the media cover the Ethiopian Somali region.
Keeping a blind eye on the human rights violations in Ethiopia would only foment combustible tribal or clan driven violence and extremism spreading into the despotic country and the region. The very disaster the United States is expending vast resources trying to eliminate in Somalia.
Enough is enough. I strongly believe it is time to stop the reign of terror of the Liyu police. This paramilitary force is not going to change its behavior or reform itself because they are not a professional police force operating under the rule of law. They are neither protecting nor serving the people in the region. They are not accountable for their own actions.
In fact, it is time to disband the Liyu police and replace it with an inclusive force from all Somali clans in the region trained by the United Nations or EU. What the beleaguered civilian populations in the region desperately need is a professional police force that would respect human rights, protect the people, and keep the peace.
*Source The Hill
0