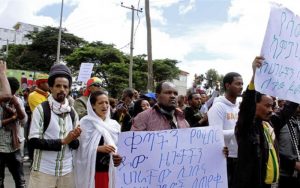 Migrant domestic workers in the Middle East and Gulf countries are ranked, with Filipinos at the top commanding the highest salaries, followed by Indonesian and Sri Lankan women, and African women at the bottom. The region has a deeply rooted culture of discrimination against people of African descent.

Ethiopia is one of the most populous countries in Africa, with recent estimation of the country’s population placing it at over 100 million people. Ethiopia has a long history of migration to different parts of the world. During the 1970s and 1980s, due to war and political repression at the time, the largest flow of refugees and migrants in the world emerged from Ethiopia. As with other parts of the Horn of Africa region, Ethiopia has experienced various types of migration waves over the past 40 years or more. Apart from war and political issues, in recent years economic factors are seen among the strong drivers of migration of Ethiopian men and women to different parts of the world.

Remittances to Ethiopia from migrant communities provide an integral source of income for families to sustain themselves through external shocks and to meet their basic needs. In the majority of cases, women domestic workers send almost all of their monthly income as remittances to their families, which depend on this kind of money to meet living costs. Since the 1990s increased numbers of young rural Ethiopian women  have been migrating  from their country to work in the Middle East and  Arab Gulf countries, through either legitimate or hidden means. The oil boom transformed the Arab Gulf into some of the wealthiest nations in the world, bringing about higher standards of living and improved infrastructure for education and health services. Subsequently money and an easy lifestyle have changed the cultural interactions of these communities. Domestic workers have always been a symbol of status, prestige, and wealth in the community of the Gulf countries and beyond. Now being the main exporters of oil, almost all households in these countries are able to hire one or more domestic workers. Such new potentials have paved the way to redefine class in relation to having domestic workers.

It is important to observe here that domestic workers in the Middle East and Gulf countries are ordered in a radicalized hierarchy, with Filipino women at the top signaling the highest status and commanding the highest salaries, followed by Indonesian and Sri Lankan women, and African women at the bottom. Other Middle Eastern countries apart from the oil rich nations, such as Lebanon, Jordan, and Yemen and eventually also countries like Sudan are becoming   a major destination for Ethiopian women domestic workers.

In recent years trends have emerged within several countries, including poor countries like   Sudan, that place household work within a so-called “culture of shame”. This is due to the socially and culturally polarized realities of communities, where even the   extremely poor would rather be homeless or go to the streets begging, than carrying out domestic work (ILO report, 2004). Such attitudes have increased the demand for foreign domestic workers and accelerated the level of migration.

The discrepancies between expectations of women from rural Ethiopia and the harsh reality for women migrant workers in the Middle East and Arab Gulf countries could, however, not be further apart. While those women who were trafficked, smuggled or migrated consciously are focusing on the end result of their migration and the possible economic elevation, they lack substantial information on the realities abroad, the nature and type of labour awaiting them, and/or cultural rules and traditions that will govern their day-to-day experiences. Lack of language skills, and being without a familiar support network, exacerbates their isolation and vulnerability.

Culturally and socially the Arab and Middle Eastern countries are inherently divided societies along tribal and sectarian lines, with a deeply rooted culture of discrimination against people of African descent. This issue is quite entrenched without being addressed despite the geographical and cultural proximities.

Many of the host countries that the women find themselves in have largely restrictive regulations for migrant workers and often no protection or judicial systems to address abuses or traffickers. Employers in the destination countries justify the retention of passports and confinement in the home on the basis of the Kafala system, which gives them legal responsibility for the residency and employment of their domestic workers. Their sense of entitlement over the worker is heightened by the significant cash outlay they have made to recruit him or her. Traditionally women in the Gulf countries have been subjected to severe restrictions and regulations, such as customs and laws, that encourage women’s subordination – through, for example, regulations concerning their dress code and their presence in public. These factors combine to render migrant women vulnerable and to make them even more susceptible to violence.

Many young rural migrant women are confronted with the need to change their religious identities, and even their names. One woman, who shared her story, said:

“When I arrived at the airport, the agent told me that I am a Muslim. I didn’t know. I didn’t dress like a Muslim. I didn’t have a picture with a headscarf in my passport, and I even wore a cross on my neck. I was told to remove the cross. How can I be a Muslim while knowing nothing about the religion? The agent told me I would survive. But I didn’t. My employers threw me away when they found out I am not [a Muslim].”

Further severe challenges are encountered by women during the month of Ramadan, imposing fasting on women who have to work day and night: “Imagine fasting coupled with the workload. During Ramadan, I had to work day and night, and I can’t sit and eat for hours like them. I thought I was going to die of starvation.”

Another young woman spoke about her increased anxiety and the cruelty she encountered   in one of the Gulf countries: “Since I was not able to understand Arabic, when they ordered me to do one thing I might do another. Their response was beating me.”

Sexual violence and resulting pregnancies from rape, sexually transmitted diseases, torture resulting in broken limbs or burning of hands or other body parts, emotional abuse, coupled with unpaid or underpaid salaries for years typically result in cycles of trauma and mental illness among large numbers of migrant domestic workers.

The hazards around the domestic work are largely due to the fact that the work occurs within private and isolated spheres. The households in the Gulf countries are highly isolated territories; therefore it leaves the workers extremely vulnerable to all forms of abuse. The other challenge is that migrant domestic workers are not only victimized by their employers and the repressive conditions in the Gulf but their repression starts at home through the traffickers who mislead them and harvest their money.

The challenges in and around the human rights violations and abuses perpetrated against migrant women domestic workers from Africa have several layers including their race, gender and area of work. The cycles of abuse begin within their home countries, where they often lack access to education and awareness, which makes them vulnerable to deception. All these factors combined place them among the most volatile group of workers, not knowing that while escaping the heat of poverty and deprivation in their homelands, they are throwing themselves into the fire of abuse, racism and torture.

* Source Pamabazuka.Hala Alkarib is Regional Director, SIHA Network. This article is based on a research paper by SIHA Network