DreamAfrica is a platform through which the old tradition of African storytelling is preserved and the telling of new stories is facilitated. It is also a common entertainment and educational platform in the household and school. 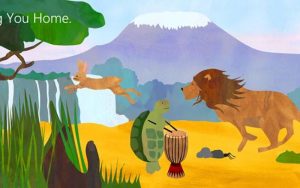 Upon consumption of stories the ‘tabula rasa’ is consequently filled up with symbolic images, text and information that can ultimately leave a significant impression upon our minds, emotions and actions. Thus, our consistent encounters with particular stories can subtly structure our lives and understanding of the world, sometimes to our detriment, as Nigerian writer Chimamanda Adichie cautions with “the danger of a single story.”

Indeed, as stories generally contribute in shaping our reality, a single story can taint and distort it. A single story about an individual, culture and society can not only breed misunderstanding but also nurture discord, stereotypes and xenophobia among a diverse populace. A single story denies individuals an experience of authenticity.

According to Chimamanda, many people particularly from the West identify with the misrepresented story of Africa “the single story of catastrophe.”

This is a common view expressed by many Africans across the globe and acknowledged by those from other regions who have had the opportunity to visit and reside in this rich and beautiful continent. Africa is a continent rich in tales of courage, honesty, loyalty, communion and optimism among many other virtues, yet these stories never see the light of day in most global mainstream media.

The time has come for Africa to recount its own narrative for the world to experience its authenticity amidst conventional tales of despair framed as its sole brand.

On 10 May 2016, a group of African journalists gathered in Nairobi for a workshop on online reporting whose theme was “Telling Africa’s Story on the Web”. The workshop was the brainchild of Fr. Don Bosco Onyalla the head of Catholic News Agency for Africa (CANAA) and his team. They had a vision and invited like-minded journalists to discuss how they could play their role in bringing Africa’s authentic story to light.

One of the ways discussed was highlighting and collaborating in forums that feature Africa in its authentic state. As the discussions progressed, the DreamAfrica app became a topic for dialogue as this digital storytelling platform is already in operation unearthing the myriad of hidden tales from Africa as narrated by Africans.

DreamAfrica is a platform through which the old tradition of African storytelling is preserved and the telling of new stories is facilitated. It is also a common entertainment and educational platform in the household and school. DreamAfrica was co-created by two young Africans – Brian Asingia from Uganda and Franco Abbot from Kenya. The two met at Lafayette College in the United States and had a conversation about the role they could play in the future of Africa before deciding to create DreamAfrica.

Africa’s wealth of stories is distributed and shared “through an application that features e- books, audio-books and video animations from renowned authors all across Africa” says Franco Abbot, CTO of the company.

Torin Perez, the organization’s Global Product Evangelist says he loves the project because DreamAfrica “is about changing the single story of Africa…it is a place where people can come to get culturally relevant content from all over the continent, families can come to enjoy multimedia stories and schools can benefit by integrating them into their teachings in the classroom.”

DreamAfrica is not only a storytelling platform but also a digital literacy tool that can be used in primary schools to enhance creative learning as the world’s demands for 21st century skills increases. “80% percent of brain development and early learning happens between 0-5 years of age. We are focused on providing knowledge and information to children 12 years and under through schools and families globally because a diverse global community needs a diverse global education that starts in early childhood development so as to address challenges of identity, culture and global connectedness,” says CEO Brian Asingia.

In Kenya, schools can benefit from the relevant Kenyan Institute of Curriculum Development approved content ready for integration in the classroom across subjects. As children learn using this tool, teachers can facilitate their development of core skills that will be necessary for their future success.

In collaboration with various entities, the DreamAfrica team organized a teachers training workshop on 26 and 27 April 2016 in Nairobi, Kenya. During this workshop teachers were introduced to the creative learning process that’s possible utilizing the content available on the DreamAfrica digital application.

Many of the beneficiaries of this training expressed their appreciation for DreamAfrica. Henry Matheka, a teacher at Langata West Primary School, Nairobi, says that DreamAfrica “actually makes learning more interesting to the child, more captivating to make the child hands on for the lesson…the child is not bored, the child feels one with the teacher.”

One attendee from Discovery Learning Alliance said “the aspect of making learning interesting is one of the things that I think will really capture the attention of learners and storytelling and how this can be used to teach other subjects is just amazing…it cuts out the monotony of teacher chalk teacher talk process”.

In realizing the aspirations of many, such as Chimamanda and the journalists at the online reporting workshop, DreamAfrica seeks to present an authentic narrative of Africa.

“I want it to be the one place where you can come and experience storytelling in an authentic way. The story is brought to life and this is the old tradition of African storytelling. We want to connect the authors in Africa and the Diaspora to a global audience”, states Franco Abbot in expressing the vision of DreamAfrica.

Thankfully, he is not alone in this vision. Recently at the 2016 African Economic Forum held at Columbia University, African philanthropist and founder of United Bank for Africa Tony Elumelu, remarked that DreamAfrica is “An example of African solutions to African problems. It doesn’t come better than this.” Selected in the inaugural class of the Tony Elumelu Entrepreneurship Program (TEEP) in 2015, we all hope the future only gets brighter for this organization and the vision it serves.

* Pambazuka.Brenda Lare is a student of Social Communication at Tangaza University College, Nairobi, Kenya. She recently began an internship at DreamAfrica and got inspired by the role the company is playing in shaping Africa’s future.

The Hypocrisy Of Canadian Ownership In Africa