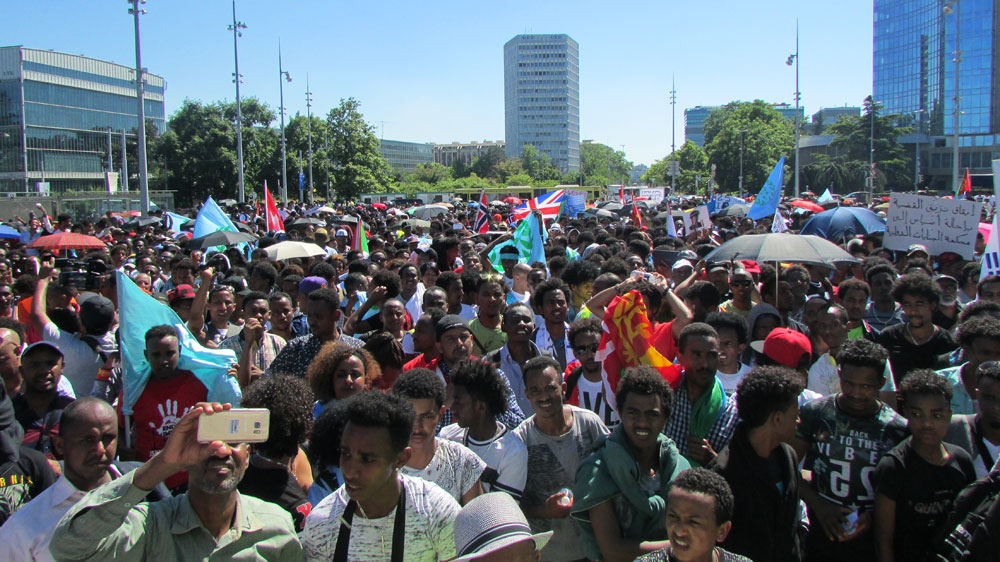 Thousands of Eritreans have rallied in Geneva against alleged human rights abuses committed by their government back home, expressing support for a new UN commission report that accuses the regime of crimes against humanity since 1991.

“It is so important that we are here to show support to the Commission of Inquiry’s report when so much energy has been spent by the Eritrean regime and their supporters to discredit the findings of the report,” Vanessa Berhe, who participated in the protest, told Al Jazeera.

“I can confidently say that today marked a very important milestone in the Eritrean opposition movement in the diaspora,” Feruz Kaissey, a Stop Slavery in Eritrea campaigner, said.

Organisers claimed more than 10,000 people from all across Europe marched in front of the UN human rights office. Al Jazeera could not independently verify the numbers.

“More than 10,000 justice-seeking Eritreans and their allies calling for an end to impunity and crimes against humanity in Eritrea” flooded Geneva today, said Daniel Rezene Mekonnen, an Eritrean human rights defender.

Selam Kidane, one of the organisers of Thursday’s protests, came from the UK to demand justice.

“We sincerely hope that the world will see how bad things are in Eritrea and how determined Eritreans are to ensure accountability,” he said.

Everyday Eritrea: Resilience in the face of repression

The UN report, which calls for Eritrean leaders to be prosecuted by the International Criminal Court in The Hague, has angered pro-regime people.

On Tuesday, thousands of pro-government Eritreans rallied in front of the UN Human Rights office based in the Swiss city, saying the report was “partial and full of lies”.

“People are expecting for the Eritrean President [Isaias Afwerki] and his close aides to be prosecuted at the ICC or in any other regional or national tribunal,” Mekonnen said.

Hundreds of Eritrean refugees and dissidents also protested in the Ethiopian capital, Addis Ababa, against the government in authoritarian East African state.

Protests were held outside the headquarters of the African Union as well refugee camps across Ethiopia, which has no diplomatic relations with neighbouring Eritrea.

The protesters in Addis Ababa carried banners calling for the indictment of Eritrea’s president. They staged a mock execution and carried a coffin draped in Eritrea’s flag.

“Everyone in Eritrea is very desperate at the moment due to the dire conditions at home,” said Bashir Isaac Abdulla, an organiser of the demonstration. “Many of them want to escape from the country by any means, and that is why we are witnessing a massive migration of the youth.”

In its report released on June 8, the United Nations Commission of Inquiry (COI) on human rights said that the Eritrean government was guilty of committing crimes against humanity since independence a quarter-century ago with up to 400,000 people “enslaved”.

In Pictures: Eritrean refugees in Ethiopia

The crimes committed include imprisonment, enforced disappearance, extrajudicial killings, and rape and murder, said the report.

The forced labour of military conscripts is also a major problem in the country, the UN said.

About 5,000 Eritreans risk their lives each month to flee the nation where forcible army conscription can last decades.

Eritrean refugees are one of the largest groups trying to cross the Mediterranean Sea to Europe. The UN report says 47,025 Eritreans applied for asylum in Europe in 2015.

The country ranks below North Korea as the worst in the world for press freedom, according to Reporters Without Borders.

“This year I also saw many new arrivals at the demonstration, refugees who have survived the boat ride over the Mediterranean,” Berhe, the activist, said.

“This was all for them. For the victims of the Eritrean regime. Once again, I felt hope,” she said.