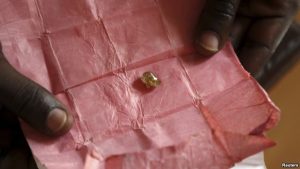 FILE – A man displays a rough diamond from the Boda region, for sale in Bangui, Central Africa Republic, May 1, 2014.

Central Africa Republic will restart diamond exports three years after its stones were found to be funding armed groups in an inter-religious conflict and placed under embargo, the mines minister said on Monday.

Having held successful elections aimed at drawing a line under the violence, new President Faustin-Archange Touadera is seeking to revive the shattered economy.

Mines Minister Leopold Mboli Fatrane said on state-owned radio that the partial lifting of the export ban would initially apply to the southern region of Berberati.

“Very quickly we’ll be working on other zones. As you know, we must follow certain conditions imposed by the Kimberley Process,” he said. “We must separate the so-called ‘blood diamonds’ from those that aren’t.”

The Kimberley Process, which implemented the export ban, is a grouping of producer countries, consumer nations, industry representatives and civil society organizations formed to prevent the sale of diamonds from funding conflicts. Last year, it agreed to allow the government to resume rough diamond exports on the condition that it implemented a program to ensure the traceability of its stones.

In September, a U.N. panel of experts said the illicit trade in diamonds was still funding major players in Central African Republic’s conflict and increasingly involved neighboring countries such as Cameroon and Chad.

“As you know, today security has returned to Berberati. The government is today able to ensure traceability there,” Mboli Fatrane said.

According to Kimberley Process data, Central African Republic officially exported 371,917 carats of diamonds, worth over $62 million, in 2012, the year before the ban was put in place.

The first diamonds to be shipped from the country following the resumption of exports comprise 3,703 carats of stocks that must be examined and approved by the government’s diamond inspection office.