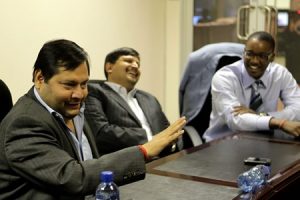 South Africa’s political community is brimming with stories about Indians’ unprecedented influence there, but Pratap Kumar Penumala isn’t celebrating. The Durban-based emeritus professor at the University of KwaZulu-Natal is worried that the smell of scandal swirling around an India-born family could stir broader anti-Indian sentiment in the country that inspired Mahatma Gandhi’s politics a century ago.

President Jacob Zuma’s friendship with the three Gupta brothers — Ajay, Atul and Rajesh, who run one of South Africa’s most successful conglomerates — is well known: Zuma’s family members have worked for the Guptas in the past, and their bond is such that the Zumas and the Guptas collectively are often dubbed “the Zuptas.” The Guptas immigrated to South Africa in 1993 from a small town in northern India and now own more than a dozen companies with interests spanning computers, media, mining, finance and armaments. But allegations of cronyism boiled over this spring after South Africa’s Deputy Minister of Finance Mcebisi Jonas accused the Guptas of promising him the finance minister’s job, a charge the family denies. Under a barrage of criticism, the Guptas resigned from the directorship of their flagship family company and fled the country, leaving an increasingly anxious Indian community behind. They feel that “the Guptas have done a disfavor to them,” Penumala says.

Some contribute publicly, others discreetly. But they all support the party in power.

Far from the heated electoral battle in America, a debate over campaign financing and the proximity of political leaders to big business is also brewing in Africa. The Gupta saga reflects the dramatic rise in influence of the Indian diaspora on the continent, as well as the challenges they face — particularly allegations that they finance corrupt despots from South Africa to Uganda. Calling out influence peddling by Indian businessmen isn’t new. Nor are the prospects of a backlash — often fueled by xenophobia and economic woes. But today’s worries signal a revival of concern that had receded significantly since attacks against Indians in Uganda in the ’70s, Fiji in the ’80s and Kenya in the ’90s.

“Businesspeople finance politicians everywhere, so campaign financing is natural,” Sudhir Ruparelia, founder of one of Uganda’s largest conglomerates and the country’s richest man, says, pointing out that it’s entirely legal to do so. “We’re fully above board,” he adds. Many Ugandan Indians see President Yoweri Museveni, in power since 1986, as a long-term ally. Museveni, after all, apologized for predecessor Idi Amin’s 1972 eviction of 70,000 South Asians, invited Indian business leaders to return and helped get them back stolen property. But critics of Museveni — who won another five-year term in April — feel that the prosperous Indian community funds only the president, skewing elections. “The Indian community is supporting Museveni big time,” says Henry Mugazi, head of the Alliance for Campaign Finance Monitoring, a Kampala-based election watchdog in Uganda. “Some contribute publicly, others discreetly. But they all support the party in power.”

Worries of a broader backlash against the Indian community in both Uganda and South Africa are fed by signals that it’s already begun. In February, ahead of the Ugandan presidential election, for example, the Indian high commission in Kampala cautioned Indians against attending political rallies after a member of the community was attacked. And in South Africa, home to a 1.3-million-strong Indian diaspora, the extremist Economic Freedom Fighters Party, led by Julius Malema, accused Zuma of selling the country “over a plate of curry.” Phumlani Mfeka, another radical youth leader, effectively made a call to arms last October, with a tweet that read “A good Indian is a dead Indian,” before citing attacks against Indians in past decades as examples. 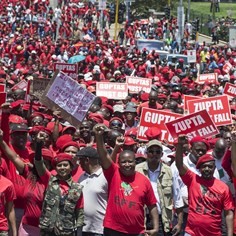 Many of the allegations simply reinforce deep-seated stereotypes. Through the colonial era, Indians generally backed the British in South Africa and East Africa and were involved in frequent clashes with angry locals, Kumar explains. The stark economic differences that persist between the Indian community and others haven’t helped. Some typically Indian traits have also left the community alienated to a certain extent, says Sanjiv Patel, a third-generation agro-industrialist in Uganda and member of Museveni’s National Resistance Movement. “We keep businesses within our families and don’t trust outsiders,” says Patel, noting that Indians also “like showing off.”

For a niece’s wedding back in 2013, the Guptas — whose family spokesman declined OZY’s request for comment — flew in a chartered plane full of Indian guests, two decades after they left India for South Africa. The Zuma government allowed the plane to land at a military air base, triggering controversy.

Allegations of influence peddling by the Indian diaspora have also historically emerged when their economic clout has intersected with politics in their adopted homes, as Indian diplomat T.P. Sreenivasan learned the hard way. As Indian high commissioner in Suva in 1987, he was ordered to leave by Fiji’s government after Indian leaders won elections in the Pacific island country. “There was an unstated social contract that the Indians could work in the plantations, in the economy, but should stay away from politics,” Sreenivasan says. “When that contract broke down is when clashes occurred.” A decade later, Sreenivasan faced unusual complaints in his first meeting with members of the Kenyan opposition after taking over as high commissioner in Nairobi. “They were really upset because the Indian community was financing only the ruling party, not the opposition,” says Sreenivasan, now retired.

He communicated the concerns to Indian business leaders, who continued their one-sided funding. Then, in 1997, armed locals broke into the Indian high commission, pinned Sreenivasan down and broke his leg with iron rods. “That was a message,” and one that may again be relevant to remember, Sreenivasan says. “Fund everyone, fund no one or get out.”