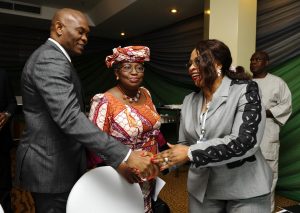 On Forbes’ 2016 list of the world’s 100 most powerful women, the highest placed African only comes in at number 80.

Behind the likes of German Chancellor Angela Merkel and U.S. Presidential hopeful Hillary Clinton, Nigeria’s Folorunsho Alakija claimed the mantle of Africa’s most powerful woman, ahead of just two others in the top 100—Liberian President and Nobel Peace laureate Ellen Johnson Sirleaf, who ranked at 83, and Ameenah Gurib-Fakim, the president of the tiny Indian Ocean island of Mauritius, who came in at 96.

Hailing from Nigeria’s commercial hub of Lagos, Alakija has made her impact (and fortune) in two disparate industries—fashion and oil and gas. The businesswoman, 65, studied fashion design in London and set about launching her own tailoring company called Supreme Stitches in the 1980s after quitting her job as a secretary at the International Merchant Bank of Nigeria, a now defunct investment bank.

Alakija won awards for her fashion design and her clients included some of Nigeria’s highest rollers, including the wife of Nigeria’s former military ruler Ibrahim Babanginda. Those connections paid off when Alakija took the plunge and moved into the oil sector, the powerhouse of Nigeria’s economy—Alakija applied for an oil prospecting licence in 1993, which was given to her by Babangida. The Nigerian fashion designer has gone on to build a vast empire and is currently the vice chair of Famfa Oil. The company owns a 60 percent stake in an oil block in the Agbami field, one of the West African countries’ largest deepwater discoveries. Until recent attacks by militants in the Niger Delta slowed production, Nigeria held the title of Africa’s largest oil producer and petroleum products account for more than 90 percent of the country’s exports.

As well as being ranked as Africa’s most powerful woman, Alakija is also believed to be one of its richest. In November 2012, Ventures Africa estimated Alakija’s worth to be at least $3.3 billion, making her the richest black woman in the world ahead of U.S. entertainment mogul Oprah Winfrey. While her worth has fallen over the past year due to the oil price crash, Alakija is still thought to be behind only Angola’s Isabel dos Santos, the daughter of President José Eduardo dos Santos and the recently appointed head of Angola’s national oil company.

On top of her various business interests, Alakija has also developed a reputation as a philanthropist. She founded the Rose of Sharon Foundation in 2008 to support widows and orphans in Nigeria, who are often cast out from their communities. She has also become a high-profile public speaker, giving advice particularly to women on juggling business and family commitments.