UN Happy Africa’s Rapid Reaction Force About to Be Reality 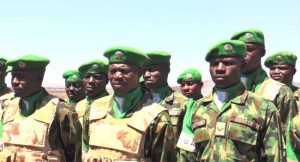 The U.N. peacekeeping chief said Tuesday that the United Nations — which has 80 percent of its peacekeepers deployed in Africa — is very happy that the African Union’s long-awaited rapid reaction force will become a reality in July.

Herve Ladsous told a Security Council meeting on peace and security cooperation between the U.N. and the AU that strengthening this partnership is “absolutely critical” especially because nine of the U.N.’s 16 peacekeeping missions are in Africa.

He said the African Standby Force, first proposed in 1997, is about to be declared operational at the next AU summit in July, which will mark an important step forward in Africa’s “capacity to respond to crises.”

The AU plan calls for each of the continent’s five regions — north, south, east, west and central — to provide a brigade of 5,000 troops to the force, with one always on standby to respond swiftly to crises anywhere in Africa.

Ladsous called the African Union “the most important partner of the U.N. in peacekeeping.”

He cited not only the U.N’s missions — from Congo, Central African Republic and Mali to South Sudan and it joint mission with the AU in Somalia — but the fact that almost 50 percent of the 105,000 U.N. peacekeepers worldwide come from AU member states.

The Security Council unanimously approved a statement stressing “the importance of further strengthening cooperation and developing an effective partnership” with the AU — not just in peacekeeping but in early warning of crises, preventive diplomacy, mediation and conflict resolution.

The council also welcomed “the enhanced peacekeeping role of the African Union” and regional African groups.

Haile Menkerios, the U.N. special envoy to the African Union, stressed that while much progress has been made, “threats to international peace and security in Africa remain real and numerous.”

In recent weeks, the U.N. and AU acted together to de-escalate political tensions in the island nation Comoros off the African coast, he said, and along with regional groups they are trying to get the government and opposition in Burundi to engage in an inclusive dialogue to find “a durable solution” to the current crisis.

Menkerios said the “collective challenge” of the U.N. and its member states is to support and strengthen the AU’s institutions to promote peace and security, “particularly the African Standby Force and the African Union’s preventive diplomacy and mediation capabilities.”