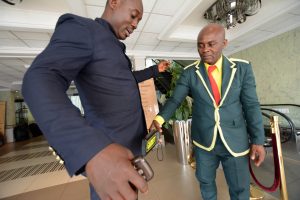 YAOUNDE – SEPTEMBER 11: A customer is checked with a metal detector a the entrance of La Falaise Hotel on September 11, 2015 in Yaounde, Cameroon. Since the kamikazz attacks which killed several people in the extreme North region, the security measures strengthened as much in state services as private firms. (Photo Jean-Pierre Kepseu / Panapress)

Is terrorism becoming the dominant mode of conflict in Africa? This is a question many are asking following the recent surge in terror attacks across Africa. Since January about a dozen African countries, including Burkina Faso, Cameroon, Libya, Mali, Nigeria, CÔte d’ivoire and Somalia, have suffered terror attacks in which thousands of civilians have been killed.

The attacks at the beginning of the year in Burkina Faso, in which 30 people died, reveal a new pattern in that the attackers — without any apparent base or network of support in the country, and with no clear strategic local goals — came from elsewhere and targeted distinct tourist attractions with no known connection to either government or the military.

The groups perpetrating these attacks are embryonic: their only definable characteristic is that they profess extremist Islamic tendencies. For this reason they respect neither political nor geographical boundaries; and, except perhaps for Al-Shabaab militants in Somalia, the attackers do not articulate clear local political goals.

From what societal wellspring does this deadly militancy arise? And how is Africa tackling it?

In the 1990s, terror attacks in Africa were somewhat episodic and limited to relatively well-defined local contexts (in Algeria, Liberia, Sierra Leone and Uganda, for example). But now the emergence of groups like Boko Haram in Nigeria (with its regional reach), and the spread of Somalia’s Al-Shabaab attacks into Kenya and Uganda, have made terrorism a key security threat in Africa.

According to research by veteran African security analyst Jakkie Cilliers, head of the Institute of Security Studies, about 37% of the 39,286 violence-related fatalities recorded in Africa in 2014 occurred in Nigeria, mainly as a result of attacks by Boko Haram. This is followed closely by the percentage of such fatalities related to attacks by Al-Shabaab in Somalia.

In 2014, for example, Boko Haram killed 6,664 people — mostly civilians — in Nigeria, Cameroon and Chad, not to mention the kidnapping of hundreds of people, including the 250 girl students of Chibok over a year ago. That’s more than the 6,073 deaths attributed to the Islamic State in Iraq and Syria (ISIS).

In all, Boko Haram has killed more than 15,000 people and displaced more than 2.1 million Nigerians since it began its extremist activities a few years ago. Mr. Cilliers’s research shows that largely due to terrorist activities, armed-conflict incidents in Africa rose from 40% of the global total in 2013 to 52% in 2014. This is despite the fact that Africa has barely 16% of the world’s population.

Africa currently hosts several terrorist groups that are affiliated with or influenced by Al-Qaeda. They operate across the vast expanse of the Sahel in Libya, Tunisia, and Algeria, as well as in Nigeria, Cameroon, Chad, Somalia, Mali and Kenya.

The deadly attacks on the Radisson Blu Hotel in Mali’s capital, Bamako, on 20 November 2015, which killed 22 people, including two attackers, and an eerily similar attack on the Splendid Hotel in Ouagadougou, the capital of Burkina Faso, on 15 January this year, which killed 30, have been claimed by Al-Qaeda in the Islamic Maghreb (AQIM).

Nigeria has spent billions of dollars and dedicated tens of thousands of troops to fight Boko Haram, as have other African countries, with significant outside support. These efforts have blunted the power of these groups. Since the election of President Muhammadu Buhari in Nigeria in March 2015, Boko Haram appears to have been pushed out of large swaths of territory it once occupied—but the militants remain active in Nigeria and surrounding countries.

In eastern Africa powerful armies from Ethiopia, Kenya, and Uganda are confronting Al-Shabaab in Somalia and Kenya. The presence of regional troops operating under the African Union Mission in Somalia (AMISOM) has prevented Al-Shabaab from taking over the country. Except for the failed bombing of a Daallo Airlines flight departing Mogadishu earlier this year, the group has lately been unable to carry out any serious attacks on the neighbouring countries.

Who is a terrorist?

Within the African Union, discussions about what constitutes a terrorist group are highly contentious. Countries in western and eastern Africa that are directly affected by such attacks are more ready to label militant groups as terrorists; southern African countries whose liberation struggles against white domination were routinely described as terrorist are invariably wary of the term. After all, they argue, even Nelson Mandela was once described by major Western powers as a terrorist.

As a result the African Union has adopted a fairly convoluted definition of terrorism, describing it merely by implication. Armed struggles waged by people in accordance with “the principles of international law for their liberation or self-determination, including armed struggle against colonialism, occupation, aggression and domination by foreign forces” shall not be considered as terrorism, it states. The burden is therefore to determine the causes, determinants and course of each violent action or manifestation of extremism.

Some experts assert that some terrorist acts are due to some unresolved local issues. Most of the attacks may be terroristic, but are the militants therefore terrorist groups by the oblique definition of the African Union? These experts believe it might be better to isolate each group’s distinct social roots — what it draws upon and what makes it persist amid the powerful forces ranged against it.

Boko Haram started as a local rebellion in northern Nigeria and for many years remained so. It has roots in the widespread resentment of economic and social dereliction and official neglect in the largely impoverished northern half of Nigeria. The election of Mr. Buhari, a northerner, has undermined the group’s appeal, which is partly why it has lost territory.

In West Africa the recent reorganization of the Multinational Joint Task Force (MNJTF) by Nigeria, Cameroon, Niger, Chad and Benin to tackle Boko Haram offered immense hope in many quarters. The force was set up in 1994 by the Nigerian government to “checkmate banditry activities and to facilitate free movement” along its northern border. But an early setback for the force came in January 2015, when Boko Haram fighters overran its headquarters at Baga, Nigeria. After that the MNJTF headquarters was moved to N’Djamena, Chad, and troops were increased.

A new concept of operations, under the supervision of the Lake Chad Basin Commission, was also recently agreed upon, and in October 2015 the United States deployed 300 Special Forces personnel to Cameroon to help in the surveillance of Boko Haram and to support the MNJTF. News reports also suggest that US president Barack Obama might be considering increasing counterinsurgency activities against the Islamic State in Libya.

Meanwhile the UN Security Council continues its support for AMISOM as well as for the African-dominated UN Multidimensional Integrated Stabilization Mission in Mali (MINUSMA)—both of them combating militant activities. Militant attacks, including against peacekeepers, continue in both countries.

Security Council resolution 2231 of July 2015 urged the African Union to undertake “a structured and targeted reconfiguration of AMISOM to boost its efficiency, in particular by strengthening command and control structures, and enhancing cross-sector operations.”

All that notwithstanding, the 12 November 2015 UN report on the UN Integrated Strategy for the Sahel paints a grim picture, noting that “terrorist groups have intensified asymmetric attacks in the north and have even moved southwards with attacks in the centre too, including in the Malian capital, Bamako, at the border with Burkina Faso and Mauritania, as well as in the south at the border region with Côte d’Ivoire.”

Despite an increase in terrorist activities, many believe that Africa should still celebrate the end of major wars—in Angola, Côte d’Ivoire, Liberia and Sierra Leone, and elsewhere. The efforts by African governments and their armies, with international support, to defeat terrorism should ensure the important achievement of ending many wars is not undercut.