South Africans are wondering how serious President Jacob Zuma is about austerity after it emerged this week that the state had spent about 8.6m rand ($550,000; £374,000) on new cars for his wives over the past three years.

In response to a parliamentary question from the opposition this week, Police Minister Nathi Nhleko said the police had spent close to $230,000 alone on luxury cars for President Zuma’s four wives this year – despite a call for citizens to tighten their belts as South Africa’s economy struggles to meet growth targets.

He said a total 11 vehicles for Mr Zuma’s wives had been purchased out of the police budget:

Mr Nhleko, who is known for putting his head on the block for Mr Zuma, justified the purchases saying they were there “to provide comprehensive protection of VIP spouses”.

It wasn’t that long ago when I watched the finance minister Pravin Gordhan announce austerity measures in parliament. 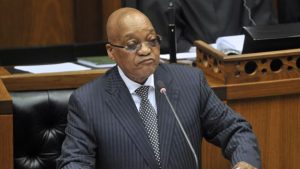 “This year’s Budget, Honourable Speaker, is focused on fiscal consolidation. We cannot spend money we do not have. We cannot borrow beyond our ability to repay,” Minster Gordhan said passionately while delivering his 2016 budget speech on 24 February.

After listing a whole number of cost reduction measures, including guidelines limiting the value of vehicles, for office bearers, he said: “Until we can ignite growth and generate more revenue, we have to be tough on ourselves.”

Concluding his speech, he even thanked the president for his “support.” A statement tinged with irony now.

He did not, however, specify the limit he wanted to impose for car purchases.

The controversy around President Zuma’s inconsistencies is not only limited to spousal budgets and their luxury cars.

Defence Minister Nosiviwe Mapisa-Nqakula vowed to go ahead with a purchase of a presidential jet believed to cost about $2.5m.

“There is no way we can avoid this because in the first instance, we must ensure the principal is safe,” she said emphatically in parliament on Wednesday.

The minister stressed that the acquisition of aircraft for the president and deputy president was urgent because the presidential jet, South Africa’s equivalent of Air Force One known as Inkwazi, and the plane transporting Deputy President Cyril Ramaphosa have experienced technical problems several times.

Replying to howls of disdain from opposition parties at the news of the purchase, she retorted:

“I’m sure your former president before democracy used to fly SAA,” she snapped back at the main opposition Democratic Alliance (DA), a historically white party.

According to the DA, the money used to buy the presidential wives’ cars could have instead be used to fund:

“Yet the president decided to spend this gigantic amount on lavish VIP vehicles for his wives,” said DA MP Zakhele Mbhele, who had initially asked the question about the controversial expenditure.

Mbuyiseni Ndlozi from the Economic Freedom Fighters said President Zuma was using the country’s treasury “as his personal purse”.