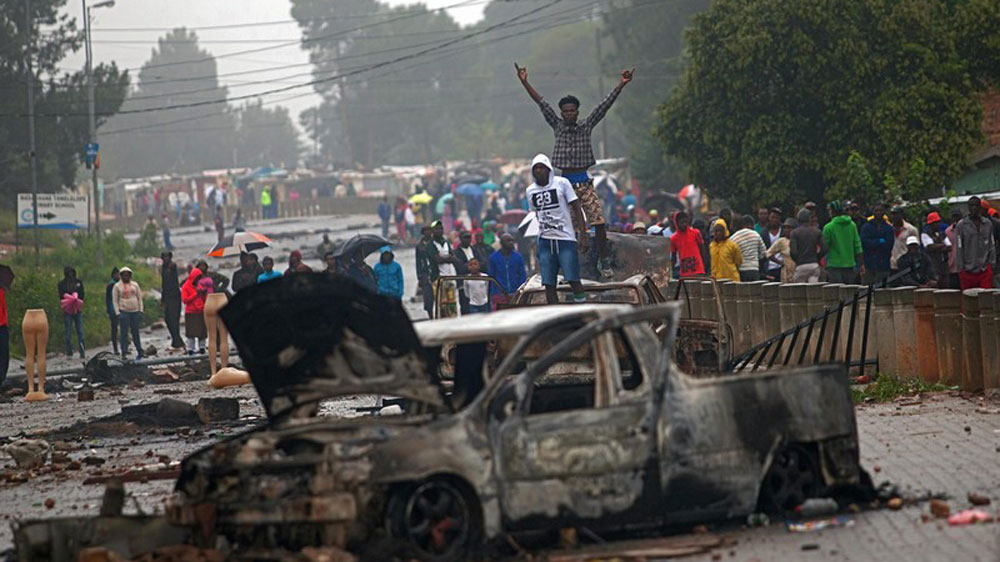 Freedom of expression groups and opposition parties have condemned the South African state broadcaster’s (SABC) decision to stop showing violent anti-government protests, claiming the move disregarded the right to dissent in the country.

The SABC said on Thursday it will stop showing violent anti-government protests flaring up around the country, in a bid to discourage others from carrying out similar forms of violence.

The public broadcaster also urged other media houses to stand in solidarity with their decision.

But Busi Mtabane, spokesperson for the Right to Know campaign, told Al Jazeera the move signaled a return to apartheid times when the national broadcaster was a mouthpiece for the ruling party.

“Filtering the news will leave people on the ground less informed and oblivious to the failures of the state,” Mtabane said.

“Most of the time, protesting is the only tool people have to be heard. We have been raising our issues, but no one is listening. Being out on the street, this is when the media turns the spotlight on these communities,” Mtabane said.

Explaining the decision, SABC’s Chief Operating Officer Hlaudi Motsoeneng said in a statement the broadcaster “would not assist these individuals to push their agenda that seeks media attention”.

The SABC’s move is said to have come after a series of deadly clashes between protesters and police in townships and informal settlements across the country.

Two people were killed on Monday after clashes broke out over the demolition of an informal settlement near the capital Pretoria.

In Limpopo province, earlier in May, at least 19 schools were burnt by residents during an anti-government protest.

Demonstrations over poor service delivery and lack of economic opportunity have become a common feature in South Africa over the past decade. More than 3.5 million South Africans under-35 are unemployed.

Activists claim SABC’s decision has come at a sensitive time for the ruling African National Congress (ANC) party, which has been under pressure to improve living conditions for the majority of South Africans.

With local elections scheduled for August, they accuse ANC of trying to control any further damage to their image ahead of the polls.

Zwelinzima Vavi, former general-secretary of the Congress for South African Trade Unions (COSATU), said the move was an attempt to “bring censorship through the backdoor”.

“They are saying it’s for the good of the society, just like the apartheid government said it was, at the time,” Vavi told Al Jazeera.

“But this is not a Banana republic. They will not get away with it,” he said.

Phumzile van Damme, spokesperson for the party, told Al Jazeera that “Motseoeng’s decision(s) has the hallmarks of authoritarianism, and seriously undermines the intelligence of the South African public”.

“The consequence of the blackout is significant, and it is undoubtedly no coincidence that it was made, and is in effect on the eve of a municipal election where the ANC stands to lose support in major municipalities by Hlaudi Motsoeneng, an ANC-aligned politically appointed individual,” van Damme said.

Likewise, the Economic Freedom Fighters party (EFF) said in a statement the move was only “about protecting of the image of the ANC, saving it from the whole country seeing that it has caused so much suffering in our country”.

But Kaizer Kganyago, spokesperson for the SABC, told Al Jazeera that criticism was unwarranted, denouncing accusations that its decision amounted to self-censorship.

“We are saying that we will still cover the protests and their dissatisfaction. We will just not show scenes of violence,” he said.

Kganyago also rebuffed suggestions that the decision had come from anyone besides the broadcaster itself, adding that “the SABC was not run by ANC”.

Al Jazeera was not able to secure comment from the ANC at the time of publication.

In an earlier interview with local media on Friday, the ruling party welcomed the SABC’s decision.

“The national broadcaster has taken the best decision, not influenced by anybody outside but by its own editorial policy,” ANC’s spokesman Zizi Kodwa was quoted as having said.