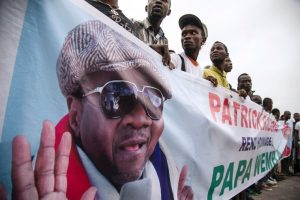 Fans of late Congolese rumba star Papa Wemba wait outside Ndjili airport during the repatriation of his body, in Kinshasa on April 28, 2016 (AFP Photo/Junior Kannah)

Kinshasa (AFP) – Democratic Republic of Congo’s rumba king Papa Wemba was posthumously awarded one of his country’s highest honours on Monday, a week after he collapsed on stage and died aged 66.

At a ceremony in the national parliament in Kinshasa, where Papa Wemba’s body lay in state, Congo’s President Joseph Kabila made the singer a grand officer of the Order of National Heros Kabila-Lumumba for “the merits, the loyal and eminent services rendered to the Congolese nation”.

Papa Wemba collapsed while performing at a festival in Ivory Coast on April 24. The flamboyant musician, who led the Kinshasa music scene for four decades, died before reaching hospital.

An enormous red hat, modelled on the one the renowned sharp dresser was wearing at the time of his death, served as the roof of the chapel erected to house his coffin inside parliament.

A life-sized effigy of the singer, dressed as he during his last concert, stood behind it.

“Papa Wemba, the Congo orphaned,” read a giant banner at the entrance to the building, where the funeral procession arrived early in the morning to be welcomed by the city governor and the military band of the Republican Guard.

A Roman Catholic priest accompanied the coffin, which was carried by eight men in black and draped in the national flag.

“This is great suffering and sadness,” said Biby Krubwa, who starred alongside Papa Wemba in a 1988 film, ‘La Vie est Belle’ (‘Life is Rosy’) about an aspiring singer who comes to Kinshasa. “Papa Wemba is a baobab that has fallen.”

Jean Misha Mulongo, a childhood friend of Papa Wemba who flew in from his home in the US city of Atlanta for his funeral, hailed the musician as a man of the people who “came to earth to give pleasure”.

A father of six, Papa Wemba helped to pioneer a blend of Congolese popular music with electric rock during the 1980s, when an interest in world music stirred in Western countries.

He is due to be laid to rest in a cemetery on the outskirts of Kinshasa on Wednesday.