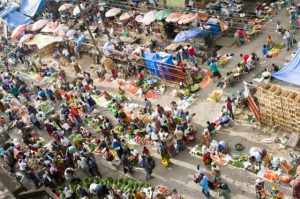 The Arusha airport looks like a huge souvenir shop with an airstrip attached. Thousands of tourists pass through here on their way to Tanzania’s famed national parks and Mount Kilimanjaro. But what those sunburned visitors may not know is that where their safari starts is where civil wars end.

This sleepy city in the north of Tanzania has been a diplomatic hub since the signing of the Arusha Accords in 1993 ended the war in Rwanda. But now, with civil conflict brewing or in full swing in neighboring Burundi and South Sudan, this neutral city may be the region’s best broker for peace agreements. Over 345 new cases of torture and abuse by security forces have been reported in Burundi since the start of 2016 and experts warn of the violence taking an even darker turn. “We are not there now,” says Alexandre Lévêque, Canada’s high commissioner and envoy to the East African community, “but everybody remembers Rwanda.”

The role of peacemaker is one that Tanzania’s recently elected president John Magufuli is taking seriously. He has appointed a seasoned diplomat as minister of foreign affairs and at the top of his agenda is addressing the violence in Burundi, where the election of President Pierre Nkurunziza to an unconstitutional third term has thrown the East African nation into turmoil. If the Tanzanian official manages to convince Nkurunziza to come to the table, that table will be in Arusha.

Home to a number of crucial institutions, including the East African Court of Justice, Arusha is also where the Burundi civil war ended in 2005 after 12 years — and some 300,000 dead. It was there that the National Liberation Forces, Burundi’s last rebel group, finally signed a deal to stop the fighting, demobilize and be integrated into the national army. Today, nestled among rolling green hills, Arusha moves slowly; save for an occasional four-wheel-drive vehicle rushing tourists to view zebras, the city gives the impression that nothing bad could happen here.

Tanzania has more moral authority than all countries in the area combined, so they are best placed to make peace happen.

But can Arusha — “the Geneva of Africa,” as Bill Clinton once called it — live up to its past image as peacemaker? Part of that depends on the rest of Tanzania. Paul Nantulya, a Pentagon adviser who was part of a peace-based negotiating team in Arusha in 1998, says having morally respected arbiters — the late South African leader Nelson Mandela and Julius Nyerere, Tanzania’s founding father — are key to any peace agreement. “Those accords only happened because of Mandela and Neyrere,” Nantulya says. “Tanzania has more moral authority than all countries in the area combined, so they are best placed to make peace happen.”

Given Tanzania’s neighbors, there isn’t much of an alternative. Kenya has a recent history of electoral violence, and Ugandan and Rwandan leaders have both forsaken term limits — the same issue fueling violence in Burundi. Meanwhile, Tanzania just had a peaceful change of government, and in 2003, when violence threatened Zanzibar, the country managed to negotiate the creation of a “unity government.”

But regional unity is lacking from the Burundi negotiations. During the 2005 Burundi accord, neighboring countries agreed to a severe embargo and to put peacekeeping boots on the ground. Today, Tanzania has to be the one to lead the way to a more coordinated effort. “Tanzania is capable of doing that,” says Hassan B. Jallow, chief prosecutor of the United Nations Mechanism for International Criminal Tribunals, from his small office in Arusha. Lévêque says it’s urgent for the country to “step up to its reputation.”

There are many obstacles remaining in the way of President Magufuli playing Switzerland’s role in this heated region. For starters, his party has a long-standing relationship with Burundi’s ruling party, so it finds itself torn between its roles as peacekeeper and ally. And Tanzania’s relationship with some of its neighbors is becoming more strained, says Nantulya. Even if it manages to be the peacemaking arbiter it aims to be, there is no guarantee of success — despite Tanzania’s best efforts to help manage violence in South Sudan after the country’s civil war, the peace accord disintegrated only a few months after its signing.

Near the Arusha airport is the almost empty Mount Meru Hotel. Recently, its sad-looking conference rooms and echoing halls were packed with more than 1,000 well-dressed men and women attending an East African summit. At the top of the agenda? Burundi. Welcoming attendees was a massive photo of Nyerere — the man who brokered the Arusha Accords and who warned, more than half a century ago, “We must either unite now or perish.”