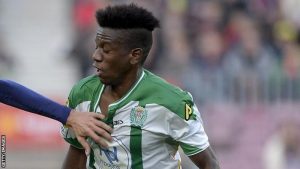 His comments come in the wake of the death of Cameroon’s Patrick Ekeng.

The 26-year-old died of a suspected heart attack on 6 May playing for Dinamo Bucharest in Romania, with the ambulance that treated him having no defibrillator.

“At professional football matches, there should be an automatic external defibrillator (AED) on the sidelines and staff adequately trained to use it,” Dvorak told BBC Sport.

“I will pass this on to the [Fifa] Council for a strategic decision so that we can implement it within our member associations.”

An AED is a device that sends a powerful electric shock to a heart to try to restore its natural rhythm.

Following the death of another Cameroonian, Marc-Vivien Foe, in 2003, Fifa has ensured that all of its international competitions take place in stadiums with sufficient medical equipment.

“We also have to see that competitions at national levels have the same standard of care,” said Dvorak.

“We have to intensify this campaign all over the world.”

Following Ekeng’s death, his agent Hasan Anil Eken proposed a new ruling called the ‘Eken’g Rule’ in which he called on Fifa to make small hospitals a mandatory requirement for every stadium.

This came after what the Turk described as ‘unacceptable mistakes’ in the treatment of Ekeng, who was buried in Cameroon on Sunday.

Ekeng’s medical assistance is currently subject to an inquiry by prosecutors in Romania after the ambulance company was heavily criticised by the country’s Interior Ministry.

In a statement, the Ministry said the company Puls had chosen to supply ambulances without defibrillators ‘without previously acquiring the legal approval in this respect.’

An investigation into other ambulances provided by Puls discovered defibrillator machines with expired batteries while some medicine, such as adrenaline shots, had expired.

“There were unacceptable mistakes caused to lose his life, with wrong doctor intervention and a lack of medical equipment like defibrillator,” Eken said in his letter to Fifa.

“In these kinds of injuries, every second is very important to save lives.”

Fifa says players that have suffered sudden cardiac arrest have ‘a success rate of 90% for resuscitation’ if they receive treatment from an AED within 1-2 minutes, with the probability of success declining at a rate of ‘about 10% per minute’ thereafter.

Video evidence shows that Ekeng was still in the insufficiently-equipped ambulance on the pitch two minutes and 45 seconds after he collapsed, prior to being taken to hospital.

Dvorak has welcomed Eken’s proposal for better facilities inside a stadium but suggests logistical and financial concerns rule it out as a possibility.

“The mini-hospital is a good idea, but this is not feasible to establish all around the world,” said the Czech.

“Having a defibrillator and educated staff is currently sufficient to deal with the situation.”

Dvorak also revealed his reaction to hearing that the ambulance treating Ekeng had no defibrillator.

“The question is why then have the ambulance there? If you have an ambulance, it is an absolute must to have a defibrillator within the ambulance.”

Paramedics who treated Fabrice Muamba when he collapsed at White Hart Lane in 2012 have credited the use of an AED on the Bolton Wanderers player as he lay on the pitch as being critical to his survival.

In 2013, Fifa issued a Medical Emergency Bag, which contains an AED among other equipment, to all its member associations, but this is largely used for international – not club – matches.

This month alone, three players have died of suspected heart attacks – with Brazil’s Bernardo Ribeiro and another Cameroonian, Jeanine Christelle Djomnam, as well as Ekeng.