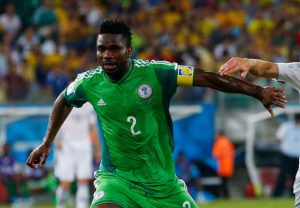 Joseph Yobo was given a grand exit from professional football by a stellar collection of football stars and legends during his testimonial in Port Harcourt on Friday.

They took on Team World led by Eto’o and coached by former Everton and Manchester United manager David Moyes, who was assisted by former Nigeria youth coach Fanny Amun.

However, Chelsea duo of John Terry and John Obi Mikel were missing after it was announced that they were going to be available for the game.

Before the game, Yobo was presented with a commemorative trophy and a jersey marked ‘101’ by NFF 2nd Vice President  Shehu Dikko, who also played in the game.

After a prolonged delay to the start of the game which led to anxiety in the stands and agitated guest of honour Nyesom Wike, governor of Rivers State, Yobo started in defence for Team World as they swiftly fell behind to a brace from Emenike after impressive work by Okocha in midfield.

Muntari and Eto’o would score for Team World, the Cameroonian making Enyeama grovel which led to a comic chase of the striker.

Eto’o would be involved in the other funny scene when he asked Okocha to be substituted due to the midfielder’s stunning skills which continuously prised open his side.

The first half ended 4-3 with Yobo scoring just before the break to keep the scores close.

He played two penalties against Dele Ayenugba, missed the first and scored the second to make it 5-3.

The game was turned around when pint-sized actor Osita Iheme (Paw paw) was freed by an Eto’o pass and he shot past Shorunmu to make it 5-4 as the crowd cheered in wild applause.
*Goal

He left his mom in Africa for high school in America. Four years later, his class paid to bring her to graduation