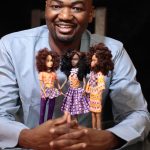 “Empowering the African girl child” is the motto of Queens of Africa; a Nigerian brand of dolls founded by Taofick Okoya in 2007. The doll range depicts various African ethnicities, as well as a variety of African hairstyles (customers may opt for dolls rocking an afro, or alternatively one with braids or braid extensions). Okoya’s mission is to spread a message which enforces young black girls their self-esteem, allowing them from an early age to have role models they can relate to. This summer, Okoya and his posse of dolls will travel across several cities in the United States, to meet and greet American clients, while further expanding the Queens of Africa footprint.

‘I got into the doll business by chance. At that time my daughter was young, and I realized she was going through an identity crisis,’ Taofick tells me when I reach out to the Lagos-based founder over the phone. He further adds, ‘She wished she was white, and I was trying to figure out where that came from. I used to always buy her white dolls, and it never got to me that is was relevant which color her dolls were. On top of that, we have DSTV in Nigeria where children watch the Disney programs, and all her favorite characters were white. I started to understand why she’d feel the way she did, ‘cause it was all that she’d been exposed to,’ the Queens of Africa dolls creator explains.

Upon realizing the non-existence of black dolls within the Nigerian market, he decided to create a brand of his own. The dolls’ body parts are manufactured in China, and are subsequently assembled in Nigeria. In the midst of it all, Taofick also empowers local communities of stay-at-home mothers, who make money off of braiding the dolls’ hair and creating outfits. ‘It takes about three hours braiding the hair. One of these women has made 60,000 Naira (roughly $300) doing this.’

The physical features of his dolls are a constant work in progress, and Okoya aims at bringing changes to the dolls’ looks every two years. ‘We’ve made the lips fuller, and the nose rounder. We also offer different hair textures, ranging from wavy to short and curly, as well as coarse hair. We’ve given the body a bit more curves, and we’re planning on doing a fuller butt in the near future. It’s a way of showing also that “African” isn’t just one look. We celebrate both skinny and curvaceous women,’ Okoya shares.

Contrary to popular believe, selling a black doll in Nigeria hasn’t always been easy for the entrepreneur. ‘There’s still somewhat of a colonial brainwash present in the country, and store owners would tell me “Oh no, black dolls don’t sell, give us more white dolls” when I first presented them with the dolls. There’s somewhat of a bandwagon mentality here, where people simply follow trends without asking themselves why. They were used to dolls being white by default, so taking a chance with a black doll was quite difficult for them at first,’ Taofick recalls. Lucky for him, he made international headlines seven years after the brand’s inception, for outselling Mattel MAT -2.53%’s Barbie in his native Nigeria (selling between 6000 and 9000 dolls a month) according to Reuters reports.

Flash forward to 2016, and Okoya is noticing a decline in demand within Nigeria, amidst the country’s turbulent economic climate. ‘In Nigeria the doll culture is still something considered to be for the privileged and upper-class. But I didn’t create this brand for the bourgeoisie, I kept the low income earners in mind, since they need the message more and form a majority. For them typically, a 1,300 Naira ($6.50) Queens of Africa doll is too expensive, which is why I launched the more affordable Naija Princess range which retails for 500 Naira ($2.50). People their buying power is limiting them at the moment however, while we were hoping to see an increase in sales post-Christmas.’

The show must go on however, and Taofick has set his sights on the American market. ‘The US market is structured in a more efficient manner, which allows us to reach more people. In Nigeria, apart from the more high-brow stores such as Shoprite and The Game Store, it’s difficult to be present across multiple stores across several states. The US has that distribution network however, and that network is power.’

This summer Taofick will tour across New York, Chicago, Los Angeles, Washington D.C. and Houston, throughout the months of June and July. In April he already made a first stop in Atlanta, to meet with wholesale buyers and customers, as part of the Coming to America tour. At present the dolls are already available for order to the American audience via Amazon, in addition to the Queens of Africa online store. On top of that, the dolls are sold by a Senegal-based retailer, as well as e-tailers based in France and Australia. Ghana, South Africa and Brazil, are next on his list.

‘We’re planning on taking part in American toy fairs where we can meet with retailers. Our ultimate goal is to be sold by the major stores in the US. I personally believe it will be less difficult to sell the dolls in America, compared to Nigeria. In Nigeria the doll culture is still being developed, so it’s easier to sell within a market that is already there, as opposed to having to create that market.’