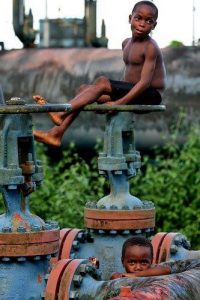 “Had long sought a separate state not because they loved power but because their conditions were peculiar and the authorities did not understand their problems. There is nothing wrong with Nigeria. What is wrong with us is the total lack of Mercy in our activities ” Major Isaac Jasper Adaka Boro.

Recall that in 2009, Late President Umaru Yar’adua introduced Amnesty programme to end Niger Delta insurgency. Two years earlier, the mafias of Nigeria politics had also deemed it important to give the vice president slot to the Niger Delta.  The beneficiary of that concession Goodluck Jonathan soon became the acting President after the death of his boss. Civil right movement like SNG led by Pastor Tunde Bakare, Sahara Reporters and Ebora Owu Aremu Obasanjo fought and led his enthronement. A right which he deserve at that moment in history. The movement fought for a person from a minority group to become the President against some forces that wanted to deprive them when circumstances called for it to the so.

Seven years on from the end of a sustained period of militancy, kidnapping and oil production cut – a new group emerged ( The Niger Delta Avengers ) and leading a fresh campaign of attacks in a bid to show their anger, hatred and in process cripple Nigeria’s economic lifeline.

Since their re-birth of terror in February, they have constantly been blowing up oil installations from chevron to NNPC.

The former President was their President and not the president of Nigeria. He lost the seat of massive looting, then came the re-birth of criminality, vandalism, kidnapping and threats. The former President opened the nation’s treasury for them and they carted away billions to build universities , mansions, arms and warships. This is a betrayal to what Isaac Jasper Boro and Ken Saro wiwa fought for.

For Six years under GEJ, the vandals were overlords, political godfathers and untouchables. Like mosquitoes, they fed fat on the Commonwealth of not just Niger Delta but the nation and completely ignored the developmental need of the Niger Delta people.  They got contract as security consultants to the Federal government. The enemies of Niger Delta resides as vandals in Niger Delta and they are Niger Deltans.

The Niger Delta after years of struggle for resource control got NDDC in 2000 and ministry of Niger Delta in 2008 and Niger Delta Amnesty Programne by former President Umaru in 2009.

Under Nigeria’s constitution,  mineral resources including oil belong to the Federal government. However, the principle of derivation states that a certain percentage of oil revenues produced by a state is returned to the state from which oil is obtained.

When substantial amount of oil first started being pumped in Niger Delta in the late 1960s,  50% of revenue of oil remitted back to the state of Origin. However,  the increasingly poweful federal government and military regimes gradually decreased the derivation percentage until it fell to 2% . It was eventually raised back to 13% by the return of democratic rule in 1999.

These blackmailers got oil wells without paying a dime, robbed oil companies and got amnesty. What are they looking for again?

According to a report published by Edinburgh international, the amnesty program is estimated to have cost the Nigerian government close to $500m in a year since 2009. In 2014, $12,245 was spent per militant .

The majority of those 30,000 enrolled in the program recieved cash stipends of $325 per month. This criminal elements have taken up arms again since their President loss in the general election.

The NDA run a website where it posts hate statement. They are angry over what they call marginalisation of Niger Delta, the unjust allocation of oil licenses, environmental pollution and the scrapping of the maritime university and undisguised discontent with Buhari administration.

Their terror has taken out 800,000 barrels per day of crude oil product from companies in Nigeria, pushing oil output to more than 22-year low. Oil revenue has equally dropped and government expectation reduced. This is war.

It is said in most saner climes that anyone carrying arms against the state is tagged enemy of the state. I will by that national principle step aside from those calling the Federal government to negotiate with a man with the gun , shooting and destroying national income for personal gains. They are nothing but criminals. If you negotiate with them ,then you are saying anyone from any region can hold a national government at ransome . We are all Biafrans. All regions are marginalised. We all have grievances but we shouldn’t destroy our economy because we are angry or for greed.

In spite of fall in oil prices and cash crunch which has affected our reserve , PMB allowed the amnesty program to continue. He has cut the subsidies and ended the handing out of security contracts to ex-millitants .

President Buhari has approved the ogoniland clean up with respect to oil pollution. A project that no administration in Nigeria since IBB to Abacha to OBJ and including their son Jonathan never gave consideration or life.

NDA is not bigger than the Federal Republic of Nigeria or the armed forces.

Let their looting governors ,elders and igwes remind them of the casualties of war ,terrorism and militancy,

Let them remind them of the Civil War and Odi massacre,

The self -inflicted oil spillage adding more to their agony.

“Take your guns, your knives and your pangas and throw them into the sea ” Nelson Mandela

” Resentment is like drinking poison and then hoping it will kill your enemies ” Nelson Mandela.

The question is ” where is the place of NDA or MEND in history?

Are they criminals or vandals or kidnappers or blackmailers or freedom fighters?

It is time for Federal government to stop playing politics and take the battle to these mosquitoes.

*Kolade Gbolagade is a social commentator and public affairs analyst.He writes from Lagos.

President Trump taken to the hospital with Covid-19 — what now? CNBC After Hours