MONROVIA (Reuters) – Lawyers for Liberian presidential candidate and former soccer star George Weah will travel to the United States after a warrant was issued charging him with child abandonment, a spokesman for Weah’s party said on Tuesday.

The warrant, filed in the U.S. state of Georgia, was in relation to Weah allegedly failing to pay child support. The crime of child abandonment is punishable by up to 12 months in prison.

The warrant was withdrawn after Weah’s lawyers spoke to court officials, said Sam Manna, a spokesman for Weah’s Congress for Democratic Change. Manna said a hearing had been scheduled for May 11 at the Newton County Court in Georgia.

Weah announced last week he would make a second bid in 2017 for the presidency of the West African nation, still trying to rebuild after civil war and a devastating Ebola outbreak.

He lost in the run-off during the 2005 presidential election to Ellen Johnson Sirleaf. Weah has said he would focus on repairing the education system, constructing clinics and fighting youth unemployment. 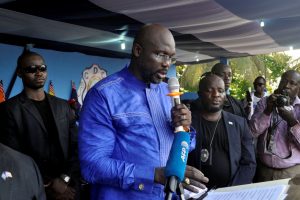 “This is a calculated propaganda trying to diminish our political momentum,” Manna said of the warrant, after thousands of supporters packed his party headquarters last week to hear Weah’s announcement that he would run again.

Weah’s illustrious soccer career in Europe lasted more than a decade and he played for teams including Paris Saint Germain in France, AC Milan in Italy and Chelsea in the United Kingdom.

Two of his children, George Jr. and Timothy, have followed in their father’s soccer footsteps.