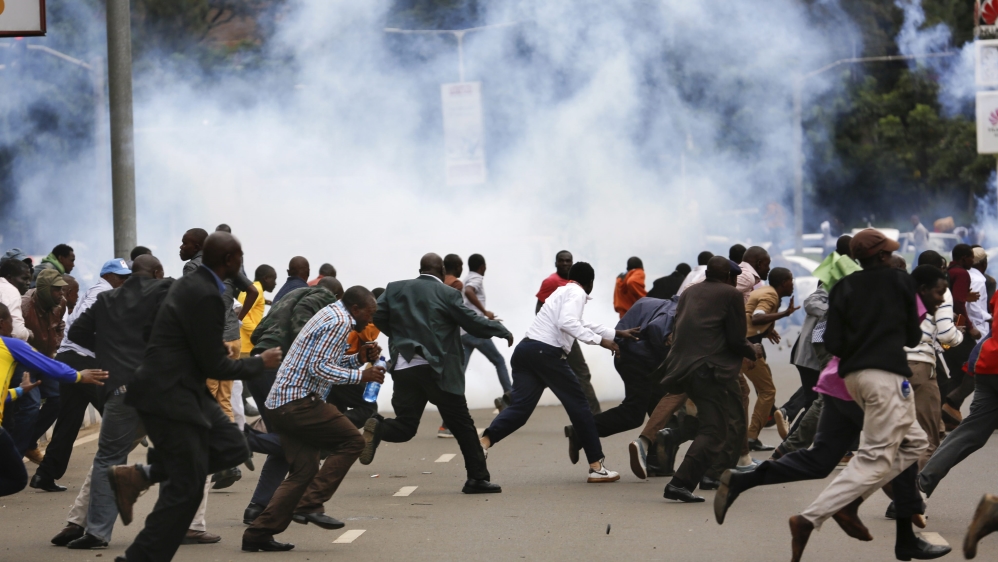 Kenyan police have fired tear gas and water cannon to disperse protesters who had gathered to demand the resignation of a body supervising next year’s presidential elections.

Hundreds demonstrated on Monday in Nairobi near the office of the Independent Electoral and Boundaries Commission (IEBC).

They were demanding the resignation of the electoral body, saying it would rig the 2017 presidential elections.

Al Jazeera’s Catherine Soi, reporting from Nairobi, said security was tight in the Kenyan capital after the protesters – who have pledged to gather every Monday – were dispersed.

“The protesters, led by opposition leader Raila Odinga, were demanding the resignation of the electoral commission as they believe there is already a plan to rig next year’s general elections in favour of the ruling party,” she said.

“The claims have been denied by the electoral body, which has described them as mere allegations and challenged the opposition to provide evidence.”

“IEBC must go,” the protesters shouted as dozens of police with support vehicles were mobilised on Monday in Nairobi.

Kenya’s presidential and parliamentary polls are more than a year away but politicians are already lining up for what could be a bruising battle.

Violence erupted after the 2007 vote in Kenya, and the opposition disputed the 2013 election results.

“According to the protesters, the resignation process will take a long time, which is why they are protesting a year in advance to pressure them to disband,” Al Jazeera’s Soi said.

Members of the opposition Coalition of Reform and Democracy (CORD), which unsuccessfully sought to overturn the 2013 election results, staged a street protest last month.

The 2013 vote, which brought President Uhuru Kenyatta to power, proceeded calmly despite the opposition challenge.

Authorities face pressure to prepare carefully to ensure a peaceful vote in a country where ethnic loyalties often trump policy among voters.

About 1,200 people were killed in ethnic killing that erupted after the 2007 elections.

Kenyatta and his deputy, William Ruto, were on opposing sides in 2007 but, in 2013, they united in a coalition.

They were both charged by the Geneva-based International Criminal Court (ICC) with fomenting the post-election violence.

Both denied the charges, which were later dropped by the ICC.