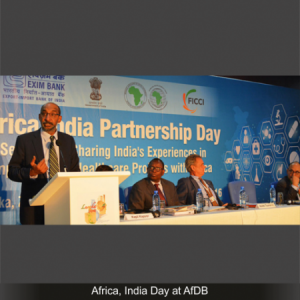 THE Export-Import Bank of India, EXIM, has announced $10-billion for Africa at the ongoing 51st African Development Bank, AfDB, Annual Meetings on Thursday, May 26, in Lusaka, Zambia.

Yaduvendra Mathur, Exim Bank of India, said the government of India has approved a $10-billion in lines of credit for health and other sectors, which would be rolled out to the African continent.

“We will be rolling out $10 billion to the African continent specifically meant for health care and this has been approved by the Government of India,” Mathur said at the Africa-India Partnership Day.

They were sharing India’s experiences in implementing projects in the healthcare sector with Africa.

This is the 4th edition of the Africa-India Partnership Day taking place at the annual meetings, which has attracted more than 4,000 delegates and participants this year.

Joseph Kasonde, Zambia’s health minister, said, “We came into government with a clear policy on universal health coverage, to us this meant three things, namely: access to increasing health care, quality of health care in our institution and nobody should be subjected to pay for health care through their pocket.”

Kasonde said the Government of India through the Exim Bank was assisting Zambia set up 650 health posts across the country.

“We are now in discussion about the public-private partnership, PPP, arrangement with India to improve the healthcare systems in our country, therefore diminishing the need for people to travel for treatment,” he said.

Kasonde said the Government of Zambia would soon introduce a health policy to alleviate the difficulties people are facing in paying for health care services.

At the Africa-India Partnership Day, Kapil Kapoor, AfDB acting vice president, Sector Operations, said, “Africa is transforming and is transforming rapidly. More than $60 billion in investment is needed for the continent over the next five years.”

Kapoor said India was better place to help Africa in the areas of investments saying that the demand for jobs exceeds the supply by 8 million jobs each year.

Giving an overview on India’s experiences in the PPP model, Additional Secretary in the Ministry of Finance Dinesh Sharma indicated that the PPP model have worked well in the power generation projects, roads and transport sector.

Sharma said, “Health care cannot be done by the government alone. We need the private sector to help develop the health sector.”

“I don’t think I will be breaking any protocols here, but I would like to announce that for the AfDB Annual Meetings next year…we look forward to going to India,” Tuunanen said.

At the event, a research paper was released by the Exim Bank entitled India-Africa Healthcare Cooperation: Way Forward.

This year’s AfDB theme is “Energy and Climate Change”, and draws on one of the African Development Banks’s “High 5” priority areas, namely to “Light up and Power Africa”.

It also reflects the AfDB’s New Deal on Energy for Africa and the key resolutions from the recent United Nations (UN) climate talks (COP21) on global warming.

The 2016 Annual Meetings theme is aligned with two of the Sustainable Development Goals, SDGs,: SDG 7 to “ensure access to affordable, reliable, sustainable and modern energy for all” and SDG 13 to “take urgent action to combat climate change and its impacts”. – AfDB