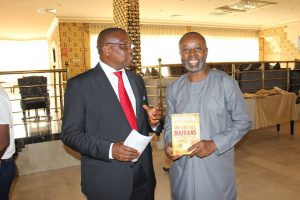 The coincidence cannot be more striking. Chido Onumah, journalist, blogger and human rights activist will be launching his book, We Are All Biafrans, in the same month and just two weeks after the much elderly Ladipo Adamolekun, renowned professor and an well-respected public administration scholar, unveiled an autobiography with the emotive title, I Remember. Both personalities are remarkable for their enduring interest in federalism.

I have neither seen nor read Adamolekun’s book, but it’s a safe bet that beyond its copious details of nostalgic reminiscences in obedience to its theme, the book in deference to his passion would offer illuminating takes on Nigeria’s current federal system, an often touchy subject about which the beloved professor feels strongly and never ducks the slightest opportunity to dissect.

I have seen and read Onumah’s book scheduled for presentation May 31 at Shehu Yar’Adua Centre, Abuja. It’s made up of intensely thought-out essays he wrote in the last three years, a compelling compendium of Nigeria’s political and socio-economic failures whose source he attributed to the deeply flawed federal structure that the country operates. 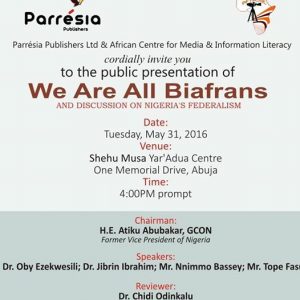 It is difficult to fault Onumah’s contention. It’s no longer news that in the Nigeria of this moment there is deep and widespread frustration with the conduct of federalism which is easily linked to a federal architecture that is responsible for the “multi-dimensional crises of poor governance, ethno-political conflict and socio-economic underdevelopment” that the country has been contending with for about five decades now.

Yet for a country like Nigeria that is steeped in diversity in language, culture, religion and all known markers of identification, federalism is the best possible instrument for managing inter-group conflict and threats of disintegration along ethnic, religious and geo-political lines. But rather than blur the multiple fault lines, Nigeria’s “bizarre” federalism has so far served to widen the cracks in addition to failing to enhance democracy and economic development.

Since the 80s, many genuinely patriotic citizens have observed that the type of federalism the country practices is counter-productive and consequently suggested a round-table discussion to enable representatives of various groups agree on modalities for an acceptable, functional federal structure. It was one suggestion power holders of that era were not ready to accommodate, no matter how persuasive it was. The most prominent arrowheads of the clamour for re-thinking the idea of Nigeria during that heady period are now sadly departed. Recall personalities like Anthony Enahoro, Alao Aka-Bashorun, Gani Fawehinmi and Beko Ransome-Kuti. They died without realizing their dream of a re-invented country.

The trajectory of the federal system of governance began to nose-dive in the mid 60s when the military dismantled the First Republic and installed a junta that laid the foundation for the soldiers’ long involvement in political governance. The military effected profound changes in the system and the result was a federalism that defeated the aim of forging the much desired unity among the various peoples of Nigeria. And it seems to be getting worse as the country grows in independence.

In a piece on 50 years of federalism (1954-2004) published in Publius: Journal on Federalism, Adamolekun regretted the steady destruction of federalism since the military took over in 1966. He believes that federalism in Nigeria is excessively dangerously centralized such that he could only suggest two choices: devolution or death. In other words, we either retool our bogus federalism to decentralize power now, or prepare at some point in the future to sing nunc dimittis for a country we have come to accept as our own.

Again, like Onumah, it is hard to fault Adamolekun’s submission. It is in a bid to avoid the professor’s second option loaded with predictably devastating consequences – which looks inevitable if the first is not embraced – that Onumah is releasing We Are All Biafrans to alert us to the grave danger that confronts us as a people if the structure of the Nigerian federation is not urgently remodeled. 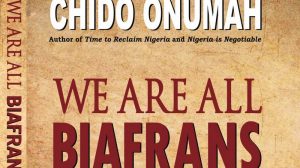 Don’t be deceived by the title of the book; it has nothing to do with advancing the cause of Biafra. Instead, the title is a metaphoric allusion to the tribulations, the feeling of neglect and marginalization of which every tribe, every ethnic group readily accuses the Nigerian state. All groups in the current dysfunctional status quo, whether Igbo, Yoruba, Hausa, Fulani, Efik, Tiv, Berom, Ijaw, Urhobo, Anioma, Isoko and others  have one grievance or the other to advertise.

Thus, with the book the author is renewing the invitation to us as a people desirous of living together as one indivisible entity to see the need to promptly re-examine the ill-formed federal formation in order to prevent the country from going the way of Yugoslavia, a bleak choice which the slain Libyan leader Muammar Gaddafi had prescribed for Nigeria a little over five years ago.

*Godwin Onyeacholem is a journalist. He can be reached on gonyeacholem@gmail.com

Buhari at One: Fuel Subsidy Magic